View basket “Letters of Insurgents” has been added to your basket. 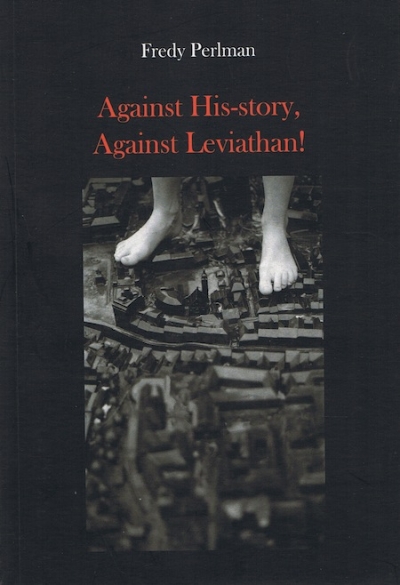 Against His-story, Against Leviathan!

Fredy Perlman’s vast study of the rise of totalitarian lifestyles and a profound affirmation of the struggle to reassert human values.

Perlman’s major work, this title is a vast study of the rise of totalitarian lifestyles and a profound affirmation of the struggle to reassert human values. A mature expression of the critique of technology Fredy developed throughout his life and one of most influential texts of the last few decades.

And we are here as on a darkling plain Swept with confused alarms of struggle and flight Where ignorant armies clash by night. (M. Arnold)

Here one can neither stand nor lie nor sit There is not even silence in the mountains But dry sterile thunder without rain… (T.S. Eliot)

The darkling plain is here. This is the waste land: England, America, Russia, China, Israel, France… And we are here as victims, or as spectators, or as perpetrators of tortures, massacres, poisonings, manipulations, despoliations. Hic Rhodus! This is the place to jump, the place to dance! This is the wilderness! Was there ever any other? This is savagery! Do you call it freedom? This is barbarism! The struggle for survival is right here. Haven’t we always known it? Isn’t this a public secret? Hasn’t it always been the big public secret? It remains a secret. It is publicly known but not avowed. Publicly the wilderness is elsewhere, barbarism is abroad, savagery is on the face of the other. The dry sterile thunder without rain, the confused alarms of struggle and flight, are projected outward, into the great unknown, across the seas and over the mountains. We’re on the side with the angels.