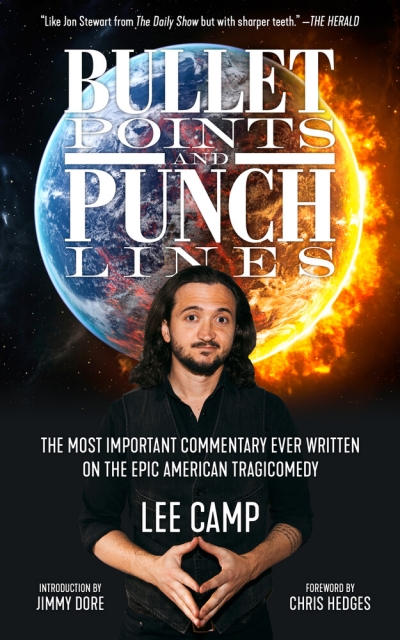 The Most Important Commentary Ever Written on the Epic American Tragicomedy
author: Lee Camp
Camp knifes his way through the jungle of fake news, alternative facts, mainstream media lies, and government blackouts.

The US empire is in steep decline. In order to wrest complete control over the globe and feed a rapacious thirst for resources and wealth, the American ruling elite is wreaking havoc around the world. Meanwhile, average Americans are suffering, legs trembling under a mountain of debt as they toil at unfulfilling, underpaying jobs. And those with enough time and energy to get angry and fight back are told that the answer is to vote for one of the two pro-war, pro–Wall Street corporate parties claiming to be their saviour.

This epic tragedy does not sound like the beginning of a joke. But somehow comedian and TV host Lee Camp makes it both funny and interesting. Whether he is setting his sights on the scandal of $21 trillion worth of unaccounted-for financial adjustments at the Pentagon or the scorching environmental and human tragedy caused by climate chaos, it’s unsurprising that one of our most incisive political commentators is technically a comedian. Camp knifes his way through the jungle of fake news, alternative facts, mainstream media lies, and government blackouts, trailblazing a path between Hunter S. Thompson and Jon Stewart.

Perhaps the present-day story of America can only accurately be told by a comedian, otherwise no one would believe it. In a world where con men are heralded as leaders, locking up peace activists is perceived as justice, trumpeting state propaganda is considered journalism, and mocking environmentalists is championed as strength, it’s only appropriate that a comedian is viewed as more reliable than the evening news.