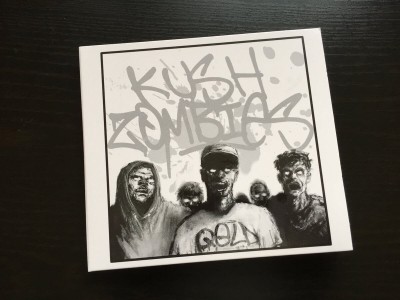 Although you’ll find that the lyrics have been lovingly presented in the insert – they’re not referenced: the citations and bibliography would take up 500+ pages.  QELD make hip-hop that’s heavily influenced by the weightiest tomes of the Ⓐ☭ anarcho-communist scene. If big books are off-putting then this album is the perfect rendering of those classic texts. The duo (plus collaborators) serve up a delightful critique of the bourgeoisie world – weaving multi-layered references to anarchist histories and contemporary struggles into tracks that touch on everyday life under capital.

£7 goes back to QELD, £2 goes into the solid-fund [PM UK’s box of £$€ that we’ll pass on to Edge Fund to help them support grass-roots groups doing positive stuff], £1 goes towards covering PM costs.

QELD’s blurb:
“Peace, love and violent social upheaval. Thanks to everyone who’s ever listened to us, put us on a bill, invited us to their city, let us crash at their yard, told a friend about us, given us a drunken compliment after a set, bought a t-shirt, played us on their radio show, reposted our videos online, passed us a joint, or just shown us love and solidarity. The list is too long and our memories are too shot to remember you all, but we can’t thank you enough.

Released March 12, 2016
Recorded and mixed between 2010 and 2015 in Bristol, England.
Mastered at Audible Oddities in Oakland, California.
Artwork by Louie Maryon, tags by Dotcom, album layout by Matt Pidala.