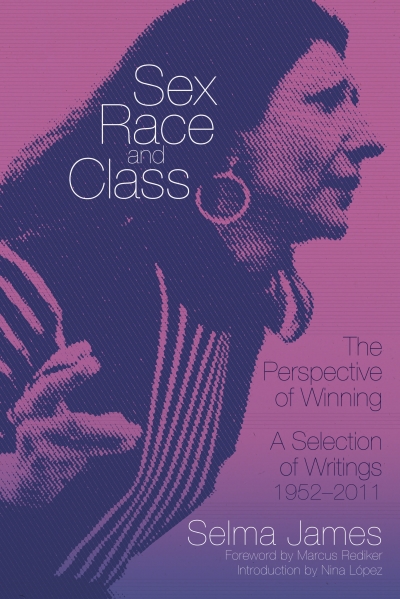 In 1972 Selma James set out a new political perspective. Her starting point was the millions of unwaged women who, working in the home and on the land, were not seen as “workers” and their struggles viewed as outside of the class struggle. Based on her political training in the Johnson-Forest Tendency, founded by her late husband C.L.R. James, on movement experience South and North, and on a respectful study of Marx, she redefined the working class to include sectors previously dismissed as “marginal.”

For James, the class struggle presents itself as the conflict between the reproduction and survival of the human race, and the domination of the market with its exploitation, wars, and ecological devastation. She sums up her strategy for change as “Invest in Caring not Killing.”

This selection, spanning six decades, traces the development of this perspective in the course of building an international campaigning network. It includes excerpts from the classic The Power of Women and the Subversion of the Community which launched the “domestic labor debate,” the exciting “Hookers in the House of the Lord” which describes a church occupation by sex workers, an incisive review of the C.L.R. James masterpiece The Black Jacobins, a reappraisal of the novels of Jean Rhys and of the leadership of Julius Nyerere, the groundbreaking “Marx and Feminism,” and more.

The writing is lucid and without jargon. The ideas, never abstract, spring from the experience of organising, from trying to make sense of the successes and the setbacks, and from the need to find a way forward.

“It’s time to acknowledge James’s path-breaking analysis: from 1972 she reinterpreted the capitalist economy to show that it rests on the usually invisible unwaged caring work of women.”  —Dr. Peggy Antrobus, feminist, author of The Global Women’s Movement: Origins, Issues and Strategies

“For clarity and commitment to Haiti’s revolutionary legacy…Selma is a sister after my own heart.”  —Danny Glover, actor and activist

“The publication of these essays reflects in concentrated form the history of the new society struggling to be born. Their appearance today could not be timelier. As the fruit of the collective experience of the last half-century, they will help to acquaint a whole new generation with not only what it means to think theoretically, but, more importantly, the requirement of organization as the means of testing those ideas. In this respect, Selma James embodies in these essays the spirit of the revolutionary tradition at its most relevant.”  —Dr. Robert A. Hill, Literary Executor of the estate of C.L.R. James, University of California, Los Angeles, Director, Marcus Garvey Papers Project

“In this incisive and necessary collection of essays and talks spanning over five decades, Selma James reminds us that liberation cannot be handed down from above. This is a feminism that truly matters.”  —Dr. Alissa Trotz, Associate Professor of Women and Gender Studies, Director of Caribbean Studies, University of Toronto

“With her latest book, Selma James reaffirms what has been evident for some time:  she is—quite simply—not only one of the most outstanding feminist thinkers of her generation but, as well, an insightful and exceedingly intelligent political analyst.”  —Dr. Gerald Horne, historian and author, John J. and Rebecca Moores Chair of History and African American Studies at the University of Houston

Selma James is a women’s rights and anti-racist campaigner and author. From 1958 to 1962 she worked with C.L.R. James in the movement for West Indian federation and independence. In 1972 she founded the International Wages for Housework Campaign, and in 2000 helped launch the Global Women’s Strike whose strategy for change is “Invest in Caring not Killing”. She coined the word “unwaged” which has since entered the English language. In the 1970s she was the first spokeswoman of the English Collective of Prostitutes. She is a founding member of the International Jewish Anti-Zionist Network. She co-authored the classic The Power of Women and the Subversion of the Community which launched the “domestic labour debate.”  Other publications include A Woman’s Place (1952), Women, the Unions and Work, or what is not to be done (1972), Sex, Race and Class (1974), Wageless of the World (1974), The Rapist Who Pays the Rent (1982), The Ladies and the Mammies—Jane Austen and Jean Rhys (1983), Marx and Feminism (1983), Hookers in the House of the Lord (1983), Strangers & Sisters: Women, Race and Immigration (1985), The Global Kitchen—the Case for Counting Unwaged Work (1985 and 1995), and The Milk of Human Kindness—Defending Breastfeeding from the AIDS Industry and the Global Market (2005).

Marcus Rediker is a an activist and Distinguished Professor of Atlantic History at the University of Pittsburgh. His books include: Between the Devil and the Deep Blue Sea (1987), The Many-Headed Hydra (2000), Villains of All Nations (2004), The Slave Ship: A Human History (2007), and many more.

Nina López is the joint co-ordinator of the Global Women’s Strike. Her writings and edited volumes include: Prostitute Women and AIDS—Resisting the Virus of Repression (1988), Some Mother’s Daughter: The Hidden Movement of Prostitute Women Against Violence (1998), The Milk of Human Kindness (2002), and Creating a Caring Economy: Nora Castañeda and the Women’s Development Bank of Venezuela (2006).