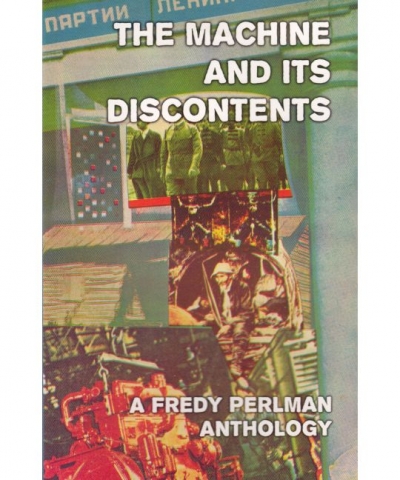 The Machine and its Discontents

A new collection of essays by Fredy Perlman, divided into sections on Worker-Student Uprisings; Critique of Political Economy; Critique of Leaders; Critique of Nationalism; Critique of ‘Progress’. Includes bibliography and index.

Of the generation that came of age through the turbulent events of May 1968, Fredy Perlman is certainly an individual that shines brightly. He participated in a student-worker action committee at the Sorbonne, which had been occupied by its students. During these intense event filled weeks he came across ideas and histories that would influence him over the following decade: the political critiques of the Situationist International, anarchism and the history of the Spanish Revolution, and the council communists.

Perlman was responsible for co-translating and making available to an English speaking audience many important texts of the left-libertarian movement including Guy Debord’s The Society of the Spectacle, Voline’s The Unknown Revolution, Jacques Camatte’s The Wandering of Humanity, I.I. Rubin’s Essays on Marx’s Theory of Value, and Jean Barrot & Francois Martin’s The Eclipse and Re-emergence of the Communist Movement.

On July 26th 1985 Perlman underwent heart surgery for a condition he had developed in his childhood. He was unable to recover from the operation and passed away in hospital at the age of 50.

This anthology gathers together Perlman’s own writings on the 1968 worker-student uprisings in France, the US and Yugoslavia, his illuminating essays on capitalist social relations and Marx’s concept of ‘commodity fetishism’, criticisms of ‘revolutionary leaders’, critiques of left nationalism, and concludes with a questioning of the Western notions of ‘civilisation’ and ‘progress’. Many of these texts have been out of print for some time.