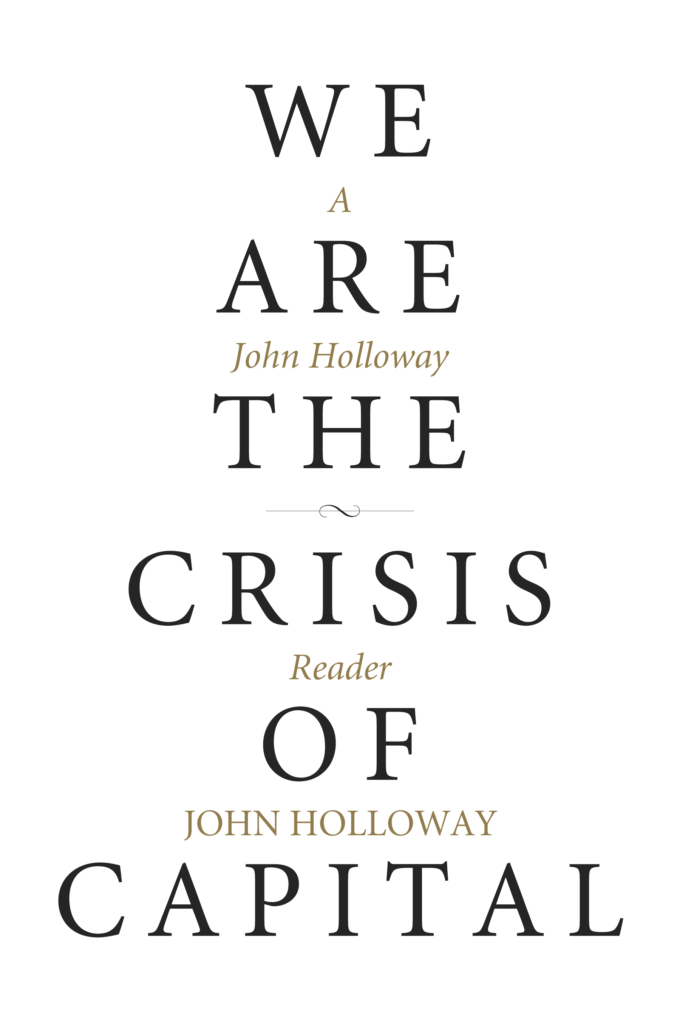 We Are the Crisis of Capital: A John Holloway Reader

We Are the Crisis of Capital collects articles and excerpts written by radical academic, theorist, and activist John Holloway over a period of forty years.

We Are the Crisis of Capital collects articles and excerpts written by radical academic, theorist, and activist John Holloway over a period of forty years. This collection asks, “Is there a way out?” How do we break capital, a form of social organisation that dehumanises us and threatens to annihilate us completely? How do we create a world based on the mutual recognition of human dignity?

Holloway’s work answers loudly, “By screaming NO!” By thinking from our own anger and creativity. By trying to recover the “we” buried under the categories of capitalist thought. By opening those categories and discovering the antagonism they conceal and by discovering that behind the concepts of money, state, capital, crisis, and so on, there moves our resistance and rebellion.

An approach sometimes referred to as Open Marxism, it is an attempt to rethink Marxism as daily struggle. The articles move forward, influenced by the German state derivation debates of the 1970s, by the CSE debates in Britain, and the group around the Edinburgh journal Common Sense, and then moving on to Mexico and the wonderful stimulus of the Zapatista uprising, and now the continuing whirl of discussion with colleagues and students in the Posgrado de Sociología of the Benemérita Universidad Autónoma de Puebla.

John Holloway is a professor of sociology at the Instituto de Ciencias Sociales y Humanidades in the Benemérita Universidad Autùnoma de Puebla, Mexico. He has published widely on Marxist theory, on the Zapatista movement and on the new forms of anticapitalist struggle. His book Change the World Without Taking Power has been translated into eleven languages and has stirred an international debate. His book Crack Capitalism (Pluto, 2010) takes the argument further, suggesting that the only way in which we can think of revolution today is as the creation, expansion, multiplication, and confluence of cracks in capitalist domination.