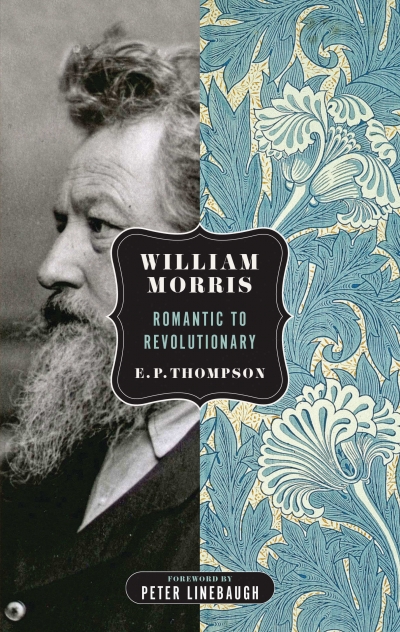 Two impressive figures, William Morris as subject and E.P. Thompson as author, are conjoined in this immense biographical-historical-critical study.

William Morris—the great 19th-century craftsman, designer, poet and writer—remains a monumental figure whose influence resonates powerfully today. As an intellectual (and author of the seminal utopian News from Nowhere), his concern with artistic and human values led him to cross what he called the “river of fire” and become a committed socialist—committed not to some theoretical formula but to the day by day struggle of working women and men in Britain and to the evolution of his ideas about art, about work and about how life should be lived.

Many of his ideas accorded none too well with the reforming tendencies dominant in the labour movement, nor with those of “orthodox” Marxism, which has looked elsewhere for inspiration. Both sides have been inclined to venerate Morris rather than to pay attention to what he said.

In this biography, written less than a decade before his groundbreaking The Making of the English Working Class, E.P. Thompson brought his now trademark historical mastery, passion, wit, and essential sympathy. It remains unsurpassed as the definitive work on this remarkable figure, by the major British historian of the 20th century.

“Two impressive figures, William Morris as subject and E.P. Thompson as author, are conjoined in this immense biographical-historical-critical study, and both of them have gained in stature since the first edition of the book was published… The book that was ignored in 1955 has meanwhile become something of an underground classic—almost impossible to locate in second-hand bookstores, pored over in libraries, required reading for anyone interested in Morris and, increasingly, for anyone interested in one of the most important of contemporary British historians… Thompson has the distinguishing characteristic of a great historian: he has transformed the nature of the past, it will never look the same again; and whoever works in the area of his concerns in the future must come to terms with what Thompson has written. So too with his study of William Morris.”
–Peter Stansky, The New York Times Book Review

“An absorbing biographical study…  A glittering quarry of marvelous quotes from Morris and others, many taken from heretofore inaccessible or unpublished sources.”
–Walter Arnold, Saturday Review

“Thompson’s is the first biography to do justice to Morris’s political thought and so assemble the man whole… It is not only the standard biography of Morris; it makes us realize, as no other writer has done, how completely admirable a man this Victorian was—how consistent and honest to himself and others, how incapable of cruelty or jargon and, above all, how free.”
–Robert Hughes, Time Magazine

Edward Palmer Thompson (1924-1993), was an English historian, writer, socialist and peace campaigner. He is probably best known today for his historical work on the British radical movements in the late 18th and early 19th centuries, in particular his seminal work The Making of the English Working Class (1963). Published almost two decades before Howard Zinn’s  A People’s History Of The United States, he popularized the concept, and practice, of ‘history from below’. He published influential biographies of William Morris and William Blake and was a prolific journalist, polemicist and essayist.

Peter Linebaugh is a social historian. He’s a graduate of the University of Warwick where he became a friend, a colleague, and a comrade of E.P. Thompson. He has taught at Harvard U. and Attica Penitentiary. Currently he teaches at the University of Toledo. He has authored and co-authored numerous books, including The London Hanged: Crime and Civil Society in the Eighteenth Century (1991), with Marcus Rediker The Many-Headed Hydra: Sailors, Slaves, Commoners and the Hidden History of the Revolutionary Atlantic (2001) and The Magna Carta Manifesto: Liberties and Commons for All (2008).