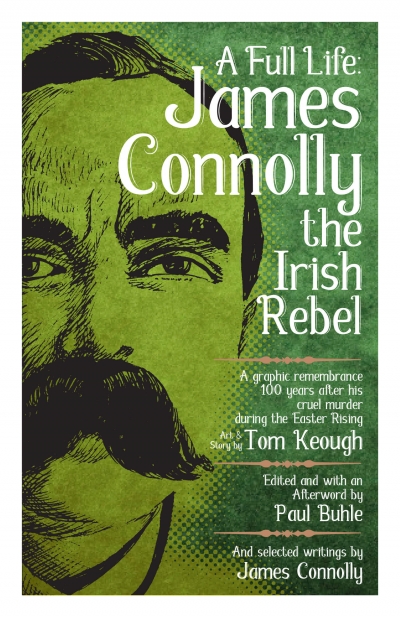 This pamphlet, the first graphic treatment of Connollyâs life, is issued on the centenary of the Easter Rising.

Executed by a British firing squad on May 12, 1916, for his role in organizing the Easter Rising, James Connolly was one of the most prominent radical organizers and agitators of his day. Born in Scotland in 1868 to Irish immigrant parents, Connolly spent most of his adult life organizing for labour unions and socialist organizations in Ireland, Scotland, and the United States. Despite attending school for only a few years, Connolly became a leading socialist writer and theoretician, founding and editing newspapers including The Socialist (Scotland), The Harp (United States), and The Workers’ Republic (Ireland). As a labour organizer, Connolly stressed the importance of direct action, broad working-class unity, and a commitment to ending labour’s exploitation. As a socialist agitator, Connolly saw economic and political independence as inextricably intertwined. This pamphlet, the first graphic treatment of Connolly’s life, is issued on the centenary of the Easter Rising.

About the Editor:
Editor Paul Buhle, formerly a senior lecturer at Brown University, produces radical comics. He founded the SDS journal Radical America and the archive Oral History of the American Left and, with Mari Jo Buhle, is coeditor of the Encyclopedia of the American Left.

About the Illustrator:
Tom Keough has been an artist all his life, trying to use his talents to do some good in this world. Tom’s paintings and illustrations have been shown at the Museum of Modern Art, the United Nations offices, in union newsletters, and used by organizations such as the National Council of Churches and the War Resisters League..