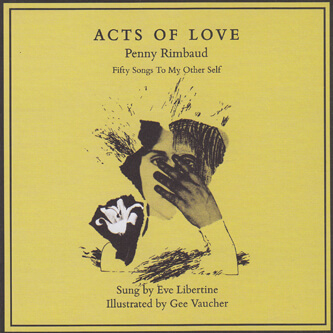 Acts of Love: Fifty Songs to My Other Self

A book of Penny Rimbaud’s poetry, complete with illustrations by Gee Vaucher, and a CD of Eve Libertine singing the poems.

124 page perfect-bound book of 50 poems by Penny Rimbaud, each illustrated by Gee Vaucher, with the accompanying audio remastered in 2008 and now released for the first time on CD.
Includes 21 additional tracks of studio extras and out-takes, and a poem by Eve Libertine.

Penny Rimbaud: “Throughout the late Sixties and early Seventies, I had worked on a series of fifty poems entitled Acts Of Love, an expression of the existential/zen hybrid which to this day remains the core of my philosophical musings. The poems laid out a raison d’être far from the political, psychological and social complexities which later began to engulf me. To counter what had become the darkness of Crass, I felt compelled to return to those poems as a source of light, and further, to make them public. I wanted to the work to be a celebration of the communality of beauty, of a shared purpose within creativity. I was looking for a confirmation of unity, a reclamation of the great romantic tradition, an act of unconditional love.”

Gee Vaucher: “For me, Acts Of Love was the starting point anyway – the poems and the original illustrations were done a long time before Crass. They were part of the inspiration, part of the source of going on to say what we did. For me, it’s a return to those roots – not going backwards, but the source of inspiration within oneself. It’s a very natural extension of what we’ve done with Crass. What we tried to do is remind people of why they were putting themselves in a very dangerous position socially and personally, by making a beautiful record really.”