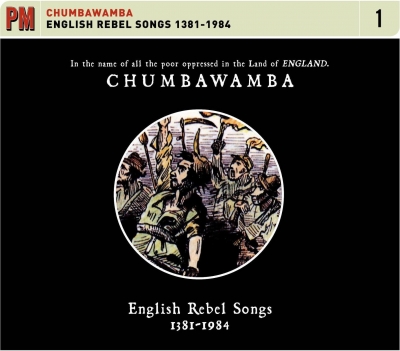 Chumbawamba
An homage to the men and women who never had obituaries in the broadsheets and who never received titles. This is an album that conjures up the tragedies and triumphs of the people who shaped England.

English Rebel Songs 1381-1984 is Chumbawamba’s homage to the men and women who never had obituaries in the broadsheets; those who never received titles or appeared in as an entry in “Who’s Who.” This is an album that conjures up the tragedies and triumphs of the people who shaped England: its citizens. This album was originally recorded in 1988 when Chumbawamba was determined to stir up a rout in the tiny anarcho-punk community by swapping guitars and drums for a cappella singing. The songs were discovered in songbooks, in folk clubs and on cassette tapes, chopped and changed and bludgeoned into shape with utmost respect for the original tunes. Fierce, sweet and powerful, English Rebel Songs 1381-1984 contains ballads not included on the original album. It’s guaranteed to sway the listener, break hearts and encourage hope… just as those who inspired the songs by changing history.

Tracks (click to listen to samples through the iTunes store where you can also buy each track or the album):

Formed in a squat in Leeds, England in 1982, the media-proclaimed “anarchist pop group” Chumbawamba has been anything but a typical “pop group.” They’ve been criss-crossing genres and raising hell via their benefit shows, topical lyrics, and general activist ways in a most “unpop” manner for over 20 years. Never mind their improbable fame that came about from their international hit “Tubthumping” in 1997… Whether they are in electric or acoustic form, this group remains true to their beliefs and still graces their audience with their righteous message, all intertwined in those instantly familiar Chumbawamba four-part harmonies and catchy choruses.

Buy the CD from Here OR….. Get the Downloads from iTunes

Click here to purchase this album in the iTunes store