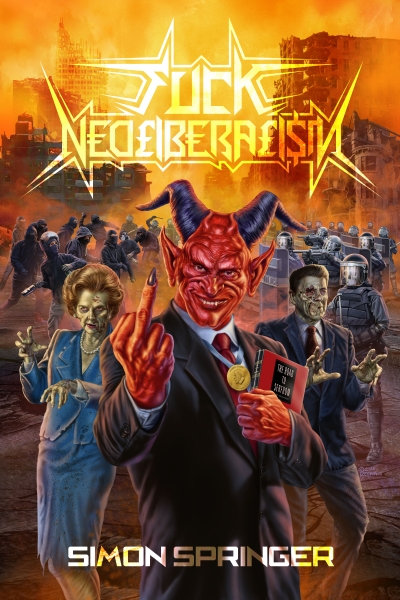 This book is a call to action against the most persistent and pestilent disease of our time. A short essay, translated into over twenty different languages – with notes from the translators.

In a long history of ruination and destruction, neoliberalism is the most recent and virulent form of capitalism. This book is a call to action against the most persistent and pestilent disease of our time. Translated into over twenty different languages, the book offers a call to action that transcends local contexts and speaks to the violent global conditions of our neoliberal age.

Fuck Neoliberalism: Translating Resistance is a worldwide middle finger to the all-encompassing ideology of our era. The original essay sparked controversy in the academy when it was first released and has since spread around the world as enthusiastic rebels translated it into their own languages. This book brings those translations together, accompanied by short essays from each translator explaining why they translated the text and describing struggles against neoliberalism in their regions.

With translations into languages from across the globe, including Mandarin, German, Indonesian, Spanish, Hindi, Italian, Korean, and many more, this book highlights the international nature of resistance to the totalitarian ideology of neoliberalism. Featuring a cover produced by renowned artist Ed Repka (a.k.a. the King of Thrash Metal Art), this internationalized, heavy-metal rant against the all-powerful ideology highlights a chink in its armor. When people across the world find a way to communicate a shared message and stand together, resistance can be both beautiful and inspiring.

About the Author:
Simon Springer is professor of human geography and director of the Centre for Urban and Regional Studies at the University of Newcastle, Australia. His research agenda explores the social and political exclusions that neoliberalism has engendered, particularly in post-transitional Cambodia, where he emphasizes the geographies of violence and power. He cultivates a cutting-edge theoretical approach to his scholarship by foregrounding both poststructuralist critique and a radical revival of anarchist geographies.