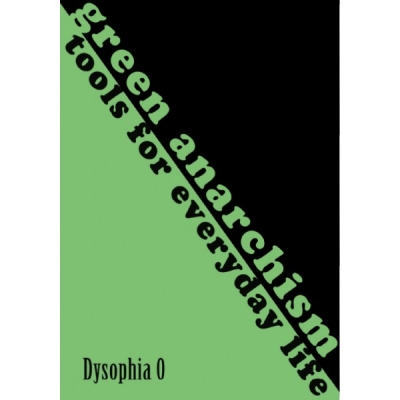 An introduction to the basic tenets of green anarchism, setting out the principles and showing how they are put into practice.

An introduction to the basic tenets of green anarchism, setting out the principles and showing how they are put into practice.

“At this point we need to be clear that this is simply our concept of what anarchism stands for.  It is often said that there are as many versions of anarchism as there are anarchists. This is not a bad thing, but if debate is to be had it will progress much better if the conceptions which underlie our anarchism are clearly laid out.

The standard approach is to consider it less as a political philosophy and rather to examine it how it is expressed – that is, through anti-state protest, in statements of non-hierarchy and rejection of leaders, in radical union movements and more often than not in its confrontational approach to the current mainstream.

We shall take a different starting point and instead following the approach of Irving Horowitz [1]. Horowitz noted that the historical strands of anarchism were expressions of more fundamental principles that were applied to the political situations the anarchists were in.

That is not to say that Horowitz identified these principles – mutual aid and solidarity, freedom & equality go as far back as the first theorists, but he pointed out that they were often being simply considered within particular contexts, that each group applying them focused on the issues that exercised them the most. Thus, as analysis changed from group to group the same words took on different meanings. However, the process and aims remained the same.

Understanding this means that it is possible to start from these principles and to bring together everything commonly referred to as core anarchist beliefs, such as anti-hierarchy, free association, etc. As we will see they are remarkably consistent and informative and the wider analysis that can be developed from it remains powerful and accessible, so making them just as useful in every day life as they are in critiquing states, bosses and wars.