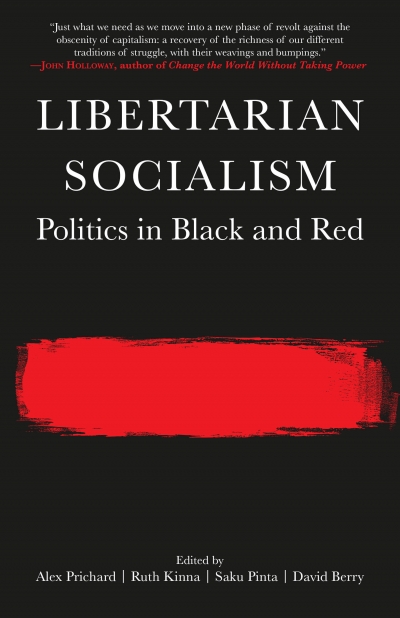 Editors: Alex Prichard, Ruth Kinna, Saku Pinta, and David Berry
This collection reveals the enduring sores in the revolutionary socialist movement in order to explore the often neglected left-libertarian currents that have thrived there.

The history of anarchist-Marxist relations is usually told as a history of factionalism and division. These essays, based on original research and written especially for this collection, reveal some of the enduring sores in the revolutionary socialist movement in order to explore the important, too often neglected left-libertarian currents that have thrived in revolutionary socialist movements. By turns, the collection interrogates the theoretical boundaries between Marxism and anarchism and the process of their formation, the overlaps and creative tensions that shaped left-libertarian theory and practice, and the stumbling blocks to movement cooperation. Bringing together specialists working from a range of political perspectives, the book charts a history of radical twentieth-century socialism, and opens new vistas for research in the twenty-first. Contributors examine the political and social thought of a number of leading socialists—Marx, Morris, Sorel, Gramsci, Guérin, C.L.R. James, Hardt and Negri—and key movements including the Situationist International, Socialisme ou Barbarie and Council Communism. Analysis of activism in the UK, Australasia, and the U.S. serves as the prism to discuss syndicalism, carnival anarchism, and the anarchistic currents in the U.S. civil rights movement.

Alex Prichard is senior lecturer in International Relations at the University of Exeter. He gained his PhD from Loughborough University in 2008 for work on the international political theory of Pierre-Joseph Proudhon. Dr Prichard is coeditor of the Contemporary Anarchist Studies monograph series published by Manchester University Press and was coeditor of a 2016 special issue of Capital & Class on ideological convergence on the left.

Ruth Kinna works at Loughborough University in the UK. She is the author of Kropotkin: Reviewing the Classical Anarchist Tradition (2016) and writes on historical and contemporary anarchist politics. She is editor of the peer-review journal Anarchist Studies.

Saku Pinta gained his PhD from Loughborough University in 2011. His research brought to light the history of the IWW and libertarian socialism more broadly. He is the writer and coproducer of To My Son in Spain, (2009) a documentary that tells the story of Finnish-Canadians from Thunder Bay who joined the Mackenzie-Papineau Battalion of the International Brigades to fight in Spain.

David Berry is senior lecturer in History at Loughborough University. He has published widely on the history of the anarchist movement in France and in particular on the thought of Daniel Guérin. He is the author of A History of the French Anarchist Movement, 1917–1945 and coeditor with Constance Bantman of New Perspectives on Anarchism, Labour and Syndicalism: The Individual, the National and the Transnational.