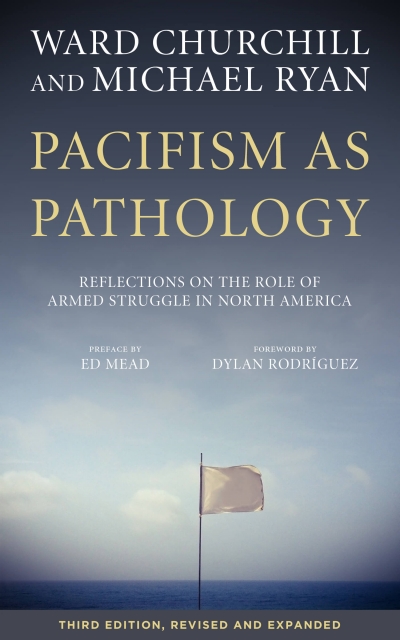 This short book challenges the pacifist movement’s heralded victories suggesting that their success was in spite of, rather than because of, their nonviolent tactics.

Pacifism as Pathology has long since emerged as a dissident classic. Originally written during the mid-1980s, the seminal essay “Pacifism as Pathology” was prompted by veteran activist Ward Churchill’s frustration with what he diagnosed as a growing—and deliberately self-neutralizing—”hegemony of nonviolence” on the North American left. The essay’s publication unleashed a raging debate among activists in both the U.S. and Canada, a significant result of which was Michael Ryan’s penning of a follow-up essay reinforcing Churchill’s premise that nonviolence, at least as the term is popularly employed by white “progressives,” is inherently counterrevolutionary, adding up to little more than a manifestation of its proponents’ desire to maintain their relatively high degrees of socioeconomic privilege and thereby serving to stabilize rather than transform the prevailing relations of power.

This short book challenges the pacifist movement’s heralded victories—Gandhi in India, 1960s antiwar activists, even Martin Luther King Jr.’s civil rights movement—suggesting that their success was in spite of, rather than because of, their nonviolent tactics. Churchill also examines the Jewish Holocaust, pointing out that the overwhelming response of Jews was nonviolent, but that when they did use violence they succeeded in inflicting significant damage to the nazi war machine and saving countless lives.

As relevant today as when they first appeared, Churchill’s and Ryan’s trailblazing efforts were first published together in book form in 1998. Now, along with the preface to that volume by former participant in armed struggle/political prisoner Ed Mead, postscripts by both Churchill and Ryan, and a powerful new foreword by leading oppositionist intellectual Dylan Rodríguez, these vitally important essays are being released in a fresh edition.

About the Contributors:
Ward Churchill was, until moving to Atlanta in 2012, a member of the leadership council of Colorado AIM. He is a life member of Vietnam Veterans Against the War and currently a member of the elders council of the original Rainbow Coalition, founded by Chicago Black Panther leader Fred Hampton in 1969. Now retired, Churchill was professor of American Indian Studies and chair of the Department of Ethnic Studies until 2005, when he became the focus of a major academic freedom case. Among his two dozen books are Agents of Repression and The COINTELPRO Papers (1990, 2002), both coauthored with Jim Vander Wall, as well as A Little Matter of Genocide (1997), and Acts of Rebellion (2003).

Michael Ryan is a Montréal-based translator and copy editor. From the mid-1970s to the mid-1990s, Ryan was active in Montréal’s Marxist and antiauthoritarian left. (He insists that the two are not mutually exclusive.) Ryan continues to believe that if we want true social change we’re going to have to kick it over.

Ed Mead is a former political prisoner who was arrested for his participation in actions carried out by the George Jackson Brigade in the Northwest during the 1970s. He spent eighteen years in prison and, while at Washington’s Walla Walla State Correctional Facility, helped found Men Against Sexism, thereby halting prisoner-on-prisoner rape while he was confined there. Also a cofounder of Prison Legal News, his memoir Lumpen was published in 2015.

Dylan Rodríguez is professor and chair of the Department of Ethnic Studies at UC Riverside. He is the author of two books: Forced Passages: Imprisoned Radical Intellectuals and the U.S. Prison Regime (2006) and Suspended Apocalypse: White Supremacy, Genocide, and the Filipino Condition (2009). His current thinking, writing, and teaching focus on how regimes of social liquidation, cultural extermination, physiological evisceration, and racist terror become normalized features of everyday life in the “post–civil rights” and “postracial” moments.