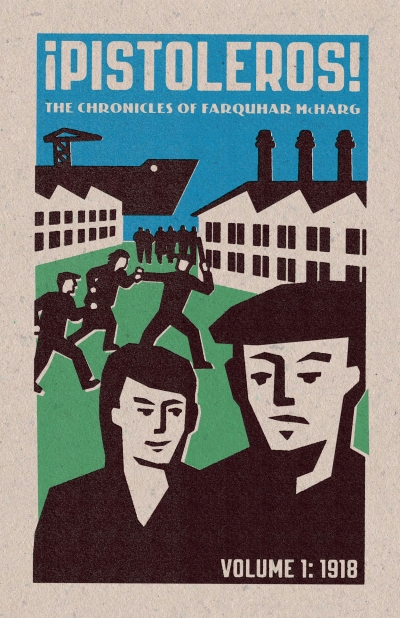 Pistoleros!: The Chronicles of Farquhar McHarg – I: 1918

A thrilling tale of adventure, treachery, and betrayal… a fascinating insight into the ideas and optimism that set the world ablaze in the first part of the twentieth century.

Barcelona, 1976: Hired gunmen brutally murder a lifelong friend and fellow anarchist, forcing Farquhar McHarg into a race to document an epic history before he too can be silenced. The first volume of his memoirs finds him a Glasgow boy, dropped by chance into Barcelona’s revolutionary underworld at the tail end of the great imperialist war of 1914-1918, recruited by Spanish anarchists to act as a go-between with Britain’s Secret Service Bureau. McHarg tells of a corrupt and brutal Spanish regime, bent on bringing a rebellious working class back under its heel, and the generous and recklessly idealistic men and women who struggled to transform it after rejecting traditional party politics.

Pistoleros! is a thrilling tale of intrigue and romance, and a sweeping inside view of the saboteurs and spies, the capitalists and bold insurrectionaries of Spain’s bloody past.

“A young boy casts his fate with the wretched of the earth, leaps onto the back of the mad bull that will become the Twentieth Century, and holds on for dear life!”—Bill Ayers

“A rare plunge into the dark whirlpool of politics, passion and intrigue that swirled around the docks, bars and tenements of Barcelona in 1918… Pistoleros! is a crack shot that rings out to remind us of times that were less bland.”—Pauline Melville, actress and author of Shape-Shifter and The Ventriloquist’s Tale

“Written with tremendous brio, this is a passionate and gripping tale of an idealist’s coming of age. McHarg’s gripping narrative convincingly taps the rich historical seams of intrigue, protest and conflict of an age in which many of the streets of Barcelona became stained with blood.”—Chris Ealham, author of Anarchism and the City: Revolution and Counter-Revolution in Barcelona, 1898-1937

Farquhar McHarg (1900-1978) was born in Glasgow, but a trip to Barcelona in 1918 landed him as a teenager in the middle of a web of espionage and anarcho-syndicalist uprisings. It launched him into the life of an anarchist revolutionary, playing a key role in the Spanish Civil War and the following decades of struggle to overthrow Franco then Salazar, and joining the underworld in multiple continents as he worked to foment revolution across the world. The blaze of 1968 found him an old man, but still fighting to achieve a better world.