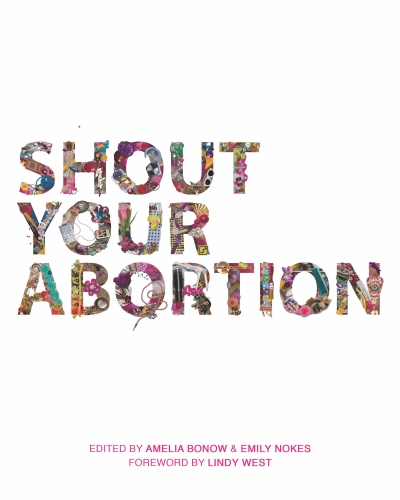 Editors: Amelia Bonow and Emily Nokes • Foreword: Lindy West
A collection of photos, essays, and creative work. A template for building new communities of healing. A call to action.

Following the U.S. Congress’s attempts to defund Planned Parenthood, the hashtag #ShoutYourAbortion became a viral conduit for abortion storytelling, receiving extensive media coverage and positioning real human experiences at the center of America’s abortion debate for the very first time. The online momentum sparked a grassroots movement that has subsequently inspired countless individuals to share their abortion stories in art, media, and community events all over the country, and to begin building platforms for others to do the same.

Shout Your Abortion is a collection of photos, essays, and creative work inspired by the movement of the same name, a template for building new communities of healing, and a call to action. Since SYA’s inception, people all over the country have shared stories and begun organizing in a range of ways: making art, hosting comedy shows, creating abortion-positive clothing, altering billboards, starting conversations that had never happened before. This book documents some of these projects and illuminates the individuals who have breathed life into this movement, illustrating the profound liberatory and political power of defying shame and claiming sole authorship of our experiences. With Roe vs. Wade on the brink of reversal, the act of shouting one’s abortion has become explicitly radical, and Shout Your Abortion is needed more urgently than ever before.