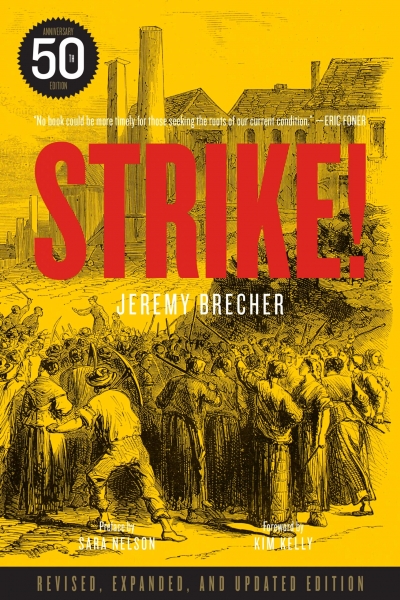 by Jeremy Brecher
Strike! narrates the dramatic story of repeated, massive, and sometimes violent revolts by ordinary working people in America. The new edition contains over a hundred pages of new materials.

Jeremy Brecher’s Strike! narrates the dramatic story of repeated, massive, and sometimes violent revolts by ordinary working people in America. Involving nationwide general strikes, the seizure of vast industrial establishments, nonviolent direct action on a massive scale, and armed battles with artillery and tanks, this exciting hidden history is told from the point of view of the rank-and-file workers who lived it. Encompassing the repeated repression of workers’ rebellions by company-sponsored violence, local police, state militias, and the U.S. Army and National Guard, it reveals a dimension of American history rarely found in the usual high school or college history course.

Since its original publication in 1972, no book has done as much as Strike! to bring U.S. labor history to a wide audience. Now this fiftieth anniversary edition brings the story up to date with chapters covering the “mini-revolts of the twenty-first century,” including Occupy Wall Street and the Fight for Fifteen. The new edition contains over a hundred pages of new materials and concludes by examining a wide range of current struggles, ranging from #BlackLivesMatter, to the great wave of teachers’ strikes “for the soul of public education,” to the global “Student Strike for Climate” that may be harbingers of mass strikes to come.