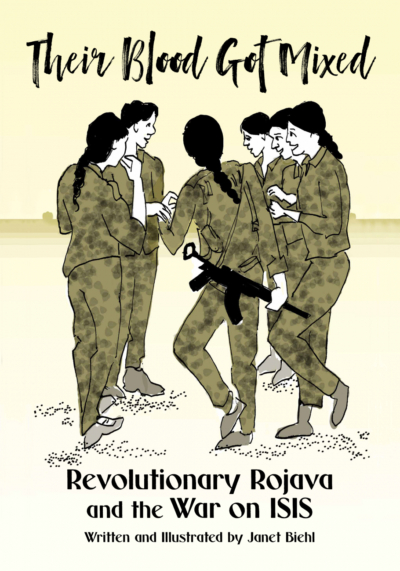 Their Blood Got Mixed

Janet Biehl
An illustrated exploration of the Kurdish people’s struggle, their revolution, and resistance to ISIS.

In the summer of 2012 the Kurdish people of northern Syria set out to create a multiethnic society in the Middle East. Persecuted for much of the 20th century, they dared to try to overcome social fragmentation by affirming social solidarity among all the region’s ethnic and religious peoples. As Syria plunged into civil war, the Kurds and their Arab and Assyrian allies established a self-governing polity that was not only multiethnic but democratic. And women were not only permitted but encouraged to participate in all social roles alongside men, including political and military roles.

To implement these goals, Rojava wanted to live in peace with its neighbors. Instead, it soon faced invasion by ISIS, a force that was in every way its opposite. ISIS attacked its neighbors in Iraq and Syria, imposing theocratic, tyrannical, femicidal rule on them. Those who might have resisted fled in terror. But when ISIS attacked the mostly Kurdish city of Kobane and overran much of it, the YPG and YPJ, or people’s militias, declined to flee. Instead they resisted, and several countries, seeing their valiant resistance, formed an international coalition to assist them militarily. While the YPG and YPJ fought on the ground, the coalition coordinated airstrikes with them. They liberated village after village and in March 2019 captured ISIS’s last territory in Syria.

Around that time, two UK-based filmmakers invited the author to spend a month in Rojava making a film. She accepted, and arrived to explore the society and interview people. During that month, she explored how the revolution had progressed and especially the effects of the war on the society. She found that the war had reinforced social solidarity and welded together the multiethnic, gender-liberated society. As one man in Kobane told her, “Our blood got mixed.”

Janet Biehl, an independent scholar and artist, collaborated with the social theorist Murray Bookchin for his last nineteen years (1987–2006). After his death, she wrote his biography. Bookchin’s writings influenced an ideological transformation of the Kurdish freedom movement away from Marxism and statism and toward grassroots democracy and ecology. To observe the implementation of his ideas, she visited northeastern Syria several times and chronicled her observations in numerous articles. She has also translated several German-language books about the Kurdish movement into English. Their Blood Got Mixed is her first graphic novel.