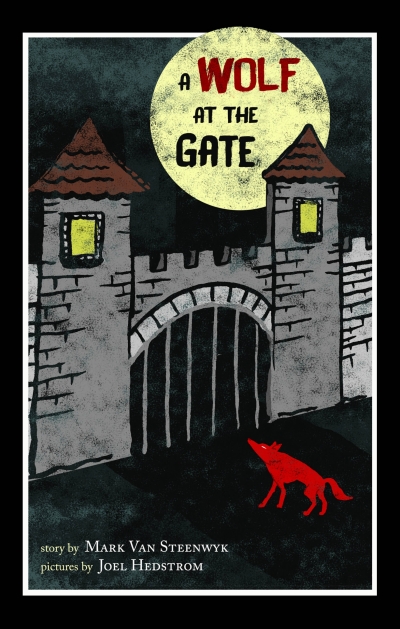 A Wolf at the Gate

This retelling of the legend of Saint Francis and the Wolf explores what it means to be a peacemaker in the midst of violence and how to restore our relationship with creation.

The Blood Wolf prowls near the village of Stonebriar at night. She devours chickens and goats and cows and cats. Some say children are missing. But this murderous wolf isn’t the villain of our story, she’s the hero!

The Blood Wolf hates humankind for destroying the forest, but an encounter with a beggar teaches her a better way to confront injustice. How will she react when those she loves are threatened?

This imaginative retelling of the legend of Saint Francis and the Wolf explores what it means to be a peacemaker in the midst of violence and how to restore a healthy relationship with creation.

Settle in and read a tale of tooth and sword, of beggars and lords, of outlaws and wild beasts. It is a story of second chances and the power of love. This is the story of A Wolf at the Gate.

And the book is now available with a family-friendly rollicking musical soundtrack CD from Jon Felton and his Soulmobile, Songs for A Wolf at the Gate.

About the Author and Illustrator:

Mark Van Steenwyk founded the Mennonite Worker in Minneapolis in 2004. He is a Mennonite minister with an M.Div., with a concentration in Christian thought. He is a writer, speaker, and grassroots educator working with groups to help them live more deeply into the radical implications of the teachings of Jesus. He is the author of several books, including The unKingdom of God, That Holy Anarchist, and The Missio Dei Breviary. He lives with his wife Amy and son Jonas in one of the Mennonite Worker’s houses of hospitality.

Joel Hedstrom is an illustrator working in the Twin Cities area. He graduated in 2010 with a BFA from the College of Visual Arts. His influences include Japanese woodblock prints, tattoos, and Greek vases.