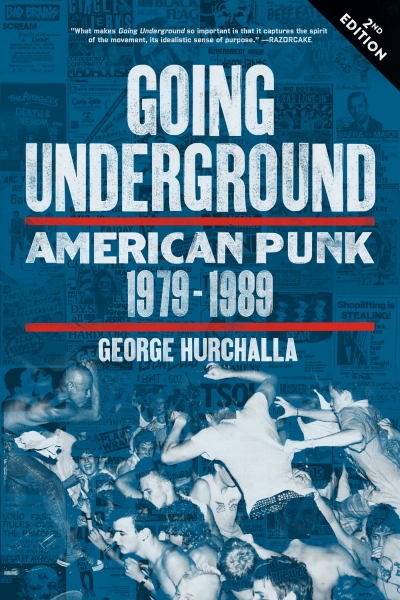 The product of decades of work and multiple self-published editions, Going Underground, is the most comprehensive look yet at Americaâs nationwide underground punk scene.

The product of decades of work and multiple self-published editions, Going Underground, written by 1980s scene veteran George Hurchalla, is the most comprehensive look yet at America’s nationwide underground punk scene.

Despite the mainstream press declarations that “punk died with Sid Vicious” or that “punk was reborn with Nirvana,” author Hurchalla followed the DIY spirit of punk underground, where it not only survived but thrived nationally as a self-sustaining grassroots movement rooted in seedy clubs, rented fire halls, Xeroxed zines, and indie record shops.

Rather than dwell solely on well-documented scenes from Los Angeles, New York, and Washington, DC, Hurchalla delves deep into the counterculture, rooting out stories from Chicago, Philadelphia, Austin, Cincinnati, Miami, and elsewhere. The author seamlessly mixes his personal experiences with the oral history of dozens of band members, promoters, artists, zinesters, and scenesters. Some of the countless bands covered include Articles of Faith, Big Boys, Necros, Hüsker Dü, Bad Brains, Government Issue, and Minutemen, as well as many of the essential zines of the time such as Big Takeover, Maximum RocknRoll, Flipside, and Forced Exposure.

Going Underground features over a hundred unique photos from Marie Kanger-Born of Chicago, Dixon Coulbourn of Austin, Brian Trudell of LA, Malcolm Riviera of DC, Justina Davies of New York, Ed Arnaud of Arizona, and many others, along with flyers from across the nation.

George Hurchalla spent most of the 1990s as an itinerant wanderer and snow/music/wilderness writer and photographer, editing The Hell with Politics: The Life and Writings of Jane Wood Reno in 1994. After years of poverty pursuing his dreams and contributing sporadically to Heckler magazine, he broke down and took a paying gig to write Exploring Florida Beaches: The Atlantic Coast and Exploring Florida Beaches: The Gulf Coast for Falcon guidebooks in 2002. In February of 2004 he launched the first imprint of his own press, Spot X Guides, and published the results of a decade-long involvement with the Tahoe wilderness, Backcountry Snowboarding and Skiing in the Northern Sierra. Currently residing in Huatulco, Mexico, Hurchalla continues to write when he is not out exploring senseless beauty.