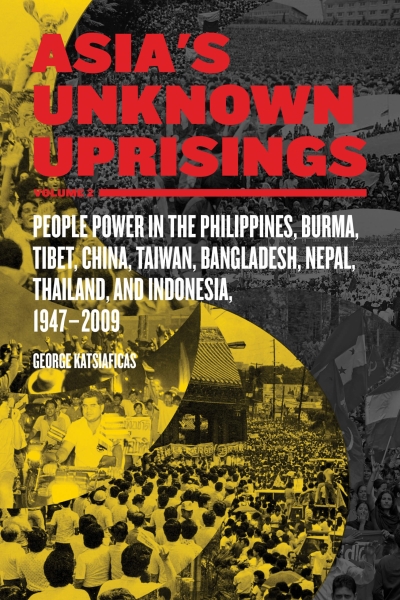 Ten years in the making, this book provides a unique perspective on uprisings in nine Asian nations in the past five decades.

Ten years in the making, this magisterial work—the second of a two-volume study—provides a unique perspective on uprisings in nine Asian nations in the past five decades. While the 2011 Arab Spring is well known, the wave of uprisings that swept Asia in the 1980s remain hardly visible. Through a critique of Samuel Huntington’s notion of a “Third Wave” of democratization, the author relates Asian uprisings to predecessors in 1968 and shows their subsequent influence on uprisings in Eastern Europe at the end of the 1980s. By empirically reconstructing the specific history of each Asian uprising, significant insight into major constituencies of change and the trajectories of these societies becomes visible.

This book provides detailed histories of uprisings in nine places—the Philippines, Burma, Tibet, China, Taiwan, Bangladesh, Nepal, Thailand, and Indonesia—as well as introductory and concluding chapters that place them in a global context and analyze them in light of major sociological theories. Profusely illustrated with photographs, tables, graphs, and charts, it is the definitive, and defining, work from the eminent participant-observer scholar of social movements.

George Katsiaficas is author or editor of eleven books, including The Imagination of the New Left: A Global Analysis of 1968, the first book to place sixties movements in their worldwide context. Together with Kathleen Cleaver, he co-edited Liberation, Imagination and the Black Panther Party. His book, The Subversion of Politics: European Autonomous Social Movements and the Decolonization of Everyday Life, was co-winner of the 1998 Michael Harrington Award for best new book in political science. In 2010, the May Mothers’ House—widows and mothers of men killed in the 1980 Gwangju Uprising—awarded his service and commitment. A longtime activist for peace and justice, he was a student of Herbert Marcuse and twice granted Fulbright fellowships. Currently, he is based at Wentworth Institute of Technology in Boston, MA.

See and hear author interviews, book reviews, and other news on the George Katsiaficas’s Page HERE