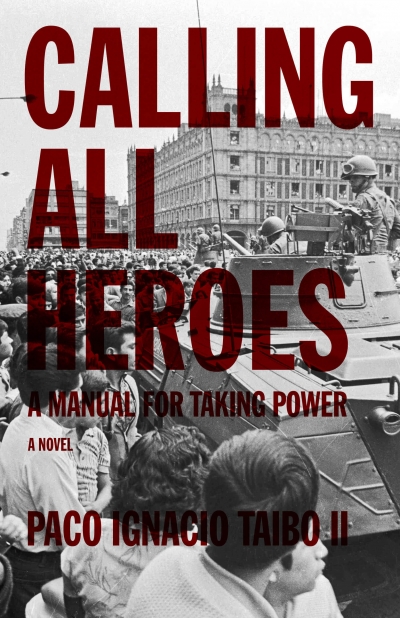 Calling All Heroes: A Manual for Taking Power

Taibo skillfully interweaves facts and reverie in a profoundly stirring portrayal of the euphoric idealism of grassroots reform and the tragic reality of revolutionary failure.

The euphoric idealism of grassroots reform and the tragic reality of revolutionary failure are at the center of this speculative novel that opens with a real historical event. On October 2, 1968, 10 days before the Summer Olympics in Mexico, the Mexican government responds to a student demonstration in Tlatelolco by firing into the crowd, killing more than 200 students and civilians and wounding hundreds more. The Tlatelolco massacre was erased from the official record as easily as authorities washing the blood from the streets, and no one was ever held accountable.

It is two years later and Nestor, a journalist and participant in the fateful events, lies recovering in the hospital from a knife wound. His fevered imagination leads him in the collection of facts and memories of the movement and its assassination in the company of figures from his childhood. Nestor calls on the heroes of his youth–Sherlock Holmes, Doc Holliday, Wyatt Earp, and D’Artagnan among them–to join him in launching a new reform movement conceived by his intensely active imagination.

About the Author:
Paco Ignacio Taibo II has lived in Mexico City since 1958 when his family fled from Spain to escape the Fascist dictatorship of General Francisco Franco. Taibo II is a Spanish leftist intellectual, historian, professor, journalist, social activist, union organizer, and world-renowned writer. Widely known for his policial novels, he is considered the founder of the neopolicial genre in Latin America and is the president of the International Association of Policial Writers. One of the most prolific writers in Mexico today, over 500 editions of his 51 books have been published in 29 countries and over a dozen languages, and include novels, narrative, historical essays, chronicles, and poetry.

Some of his novels have been mentioned among the “Books of the Year” by the New York Times, Le Monde, and the Los Angeles Times. He has received numerous awards including the Grijalbo, the Planeta/Joaquin Mortiz in 1992, the Dashiell Hammett three times for his political novels, and the 813 for the best police novel published in France. His biography of Ernesto “Che” Guevara (Ernesto Guevara, tambien conocido como el Che, 1996) has sold over half a million copies around the world and won the 1998 Bancarella Book of the Year award in Italy