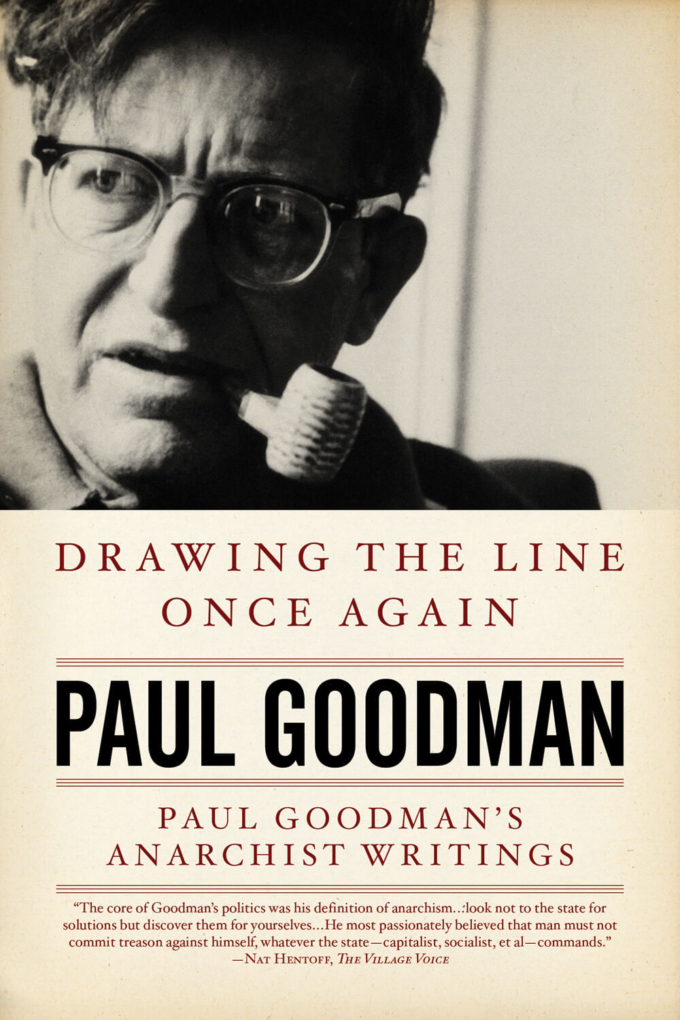 Five years after his death in 1972, Paul Goodman was characterized by anarchist historian George Woodcock as “the only truly seminal libertarian thinker in our generation.” In this new PM Press initiative, Goodman’s literary executor Taylor Stoehr has gathered together nine core texts from his anarchist legacy to future generations.

Here will be found the “utopian essays and practical proposals” that inspired the dissident youth of the Sixties, influencing movement theory and practice so profoundly that they have become underlying assumptions of today’s radicalism. Goodman’s analyses of citizenship and civil disobedience, decentralism and the organized system, show him Drawing the Line Once Again, mindful of the long anarchist tradition, and especially of the Jeffersonian democracy that resonated strongly in his own political thought. This is a deeply American book, a potent antidote to US global imperialism and domestic anomie.

“Paul Goodman has been one of the few integrated and hence liberated people of our age… He may well have been the only truly seminal libertarian thinker in our generation.”

“Paul Goodman brought a new invigorating stream into American anarchism, simply through his insistence that in all the problems of daily life we are faced with the possibility of choice between authoritarian and libertarian solutions. Taylor Stoehr’s sympathetic editing introduces Goodman’s social criticism to a new generation.”

“When I get confused about what is happening and what to do about it, I miss Paul’s eager and perceptive counsel… The important thing about Paul is that he raises the right questions. The fact that most of his answers are brilliant gives the reader an extra bonus.”

“The core of Goodman’s politics was his definition of anarchism…look not to the state for solutions but discover them for yourselves… He most passionately believed that man must not commit treason against himself, whatever the state—capitalist, socialist, et al—commands.”

See and hear book reviews, and other news on the Author’s Page HERE