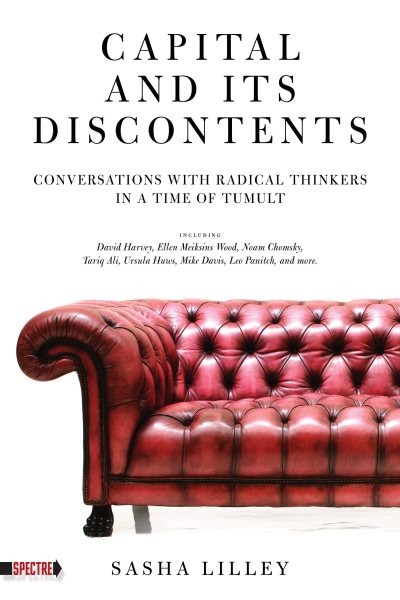 Capital and Its Discontents: Conversations with Radical Thinkers in a Time of Tumult

A series of incisive conversations with some of the most eminent thinkers and political economists on the Left–including David Harvey, Ellen Meiksins Wood, Mike Davis, Leo Panitch, Noam Chomsky, and Tariq Ali.

Capitalism is stumbling, empire is faltering, and the planet is thawing. Yet many people are still grasping to understand these multiple crises and to find a way forward to a just future. Into the breach come the essential insights of Capital and Its Discontents, which cut through the gristle to get to the heart of the matter about the nature of capitalism and imperialism, capitalism’s vulnerabilities at this conjuncture—and what can we do to hasten its demise.

Through a series of incisive conversations with some of the most eminent thinkers and political economists on the Left—including David Harvey, Ellen Meiksins Wood, Mike Davis, Leo Panitch, Tariq Ali, and Noam Chomsky—Capital and Its Discontents illuminates the dynamic contradictions undergirding capitalism and the potential for its dethroning. The book challenges conventional wisdom on the Left about the nature of globalization, neoliberalism, and imperialism, as well as the agrarian question in the Global South. It probes deeply into the roots of the global economic meltdown, the role of debt and privatization in dampening social revolt, and considers capitalism’s dynamic ability to find ever new sources of accumulation—whether through imperial or ecological plunder or the commodification of previously unpaid female labor.

The Left luminaries in Capital and Its Discontents look at potential avenues out of the mess—as well as wrong turns and needless detours—drawing lessons from the history of post-colonial states in the Global South, struggles against imperialism past and present, the eternal pendulum swing of radicalism, the corrosive legacy of postmodernism, and the potentialities of the radical humanist tradition. At a moment when capitalism as a system is more reviled than ever, here is an indispensable toolbox of ideas for action by some of the most brilliant thinkers of our times.

Noam Chomsky is one of the world’s leading intellectuals, the father of modern linguistics, and an outspoken media and foreign policy critic. He is Institute Professor emeritus of linguistics at MIT and the author of numerous books and DVDs including Crisis and Hope: Theirs and Ours published by PM Press.

Tariq Ali is a historian, novelist, and filmmaker, and the author of many books.  He is a member of the editorial committee of the New Left Review and a contributor to the Guardian and the London Review of Books.

Mike Davis is an urban theorist, historian, and political activist, author of many works including City of Quartz. He is an editor of the New Left Review and received a MacArthur Fellowship Award and the Lannan Literary Award for Nonfiction.

Ellen Meiksins Wood, for many years professor of political science at York University, Toronto, is the author of a number of books, including The Origin of Capitalism and Citizens to Lords: A Social History of Western Political Thought from Antiquity to the Middle Ages.

David Harvey is the Distinguished Professor of Anthropology at the Graduate Center of the City University of New York and a pioneering radical geographer. He has written numerous books and is among the 20 most cited authors in the humanities.

Leo Panitch teaches political economy at York University in Toronto and is coeditor of the Socialist Register. He is the author of numerous books, including In and Out of Crisis: The Global Financial Meltdown and Left Alternatives, published by PM Press.

Doug Henwood is editor of Left Business Observer, author of After the New Economy and Wall Street: How It Works and for Whom, and a contributing editor to The Nation magazine.

A South African native, Gillian Hart is professor of geography at UC Berkeley and the author of Disabling Globalization: Places of Power in Post-Apartheid South Africa.

John Bellamy Foster is the editor of the independent socialist magazine Monthly Review and professor of sociology at the University of Oregon in Eugene.  He is the coauthor, among other works, of The Great Financial Crisis: Causes and Consequences.

Ursula Huws is the editor of the international interdisciplinary journal Work Organisation, Labour and Globalisation, and the author of The Making of a Cybertariat: Virtual Work in a Real World.

David McNally is professor of political science at York University in Toronto and the author of many books, including Global Slump: The Economics and Politics of Crisis and Resistance, published by PM Press.

Jason W. Moore is a research fellow at the Department of Human Geography at Lund University, Sweden.

Vivek Chibber is professor of sociology at New York University and the author of Locked in Place: State-Building and Late Industrialization in India.

John Sanbonmatsu teaches philosophy at Worcester Polytechnic Institute in Massachusetts. He is the author of The Postmodern Prince: Critical Theory, Left Strategy, and the Making  of a New Political Subject

Andrej Grubacic is a dissident from the Balkans. A radical historian and sociologist, he is the coauthor of Wobblies and Zapatistas and author of Don’t Mourn, Balkanize! (both from PM Press).

About the Author:
Sasha Lilley is a writer and radio broadcaster. She is the co-founder and host of the critically acclaimed program of radical ideas, Against the Grain. As program director of KPFA Radio, the flagship station of the Pacifica Network, she headed up such award-winning national broadcasts as Winter Soldier: Iraq and Afghanistan. Sasha Lilley is the series editor of PM Press’ political economy imprint, Spectre.