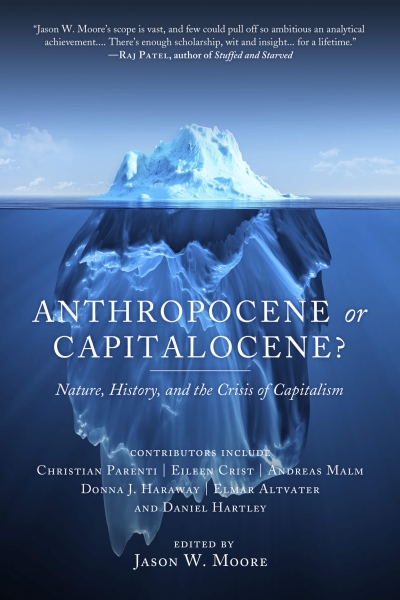 Anthropocene or Capitalocene? Nature, History, and the Crisis of Capitalism

Anthropocene or Capitalocene? offers a series of provocative essays on nature and power, humanity, and capitalism.

The Earth has reached a tipping point. Runaway climate change, the sixth great extinction of planetary life, the acidification of the oceans—all point toward an era of unprecedented turbulence in humanity’s relationship within the web of life. But just what is that relationship, and how do we make sense of this extraordinary transition?

Anthropocene or Capitalocene? offers answers to these questions from a dynamic group of leading critical scholars. They challenge the theory and history offered by the most significant environmental concept of our times: the Anthropocene. But are we living in the Anthropocene, literally the “Age of Man”? Is a different response more compelling, and better suited to the strange—and often terrifying—times in which we live? The contributors to this book diagnose the problems of Anthropocene thinking and propose an alternative: the global crises of the twenty-first century are rooted in the Capitalocene, the Age of Capital.

Anthropocene or Capitalocene? offers a series of provocative essays on nature and power, humanity, and capitalism. Including both well-established voices and younger scholars, the book challenges the conventional practice of dividing historical change and contemporary reality into “Nature” and “Society,” demonstrating the possibilities offered by a more nuanced and connective view of human environment-making, joined at every step with and within the biosphere. In distinct registers, the authors frame their discussions within a politics of hope that signal the possibilities for transcending capitalism, broadly understood as a “world-ecology” that joins nature, capital, and power as a historically evolving whole.

Jason W. Moore teaches world history and world-ecology at Binghamton University. He is author of Capitalism in the Web of Life: Ecology and the Accumulation of Capital (Verso, 2015). His essays on world history, environmental history, and political economy have been honored with the Bernstein and Byres Prize in agrarian studies, and distinguished scholarship awards of the American Society for Environmental History and the Section on the Political Economy of the World-System (American Sociological Association). He is coordinator of the World-Ecology Network.