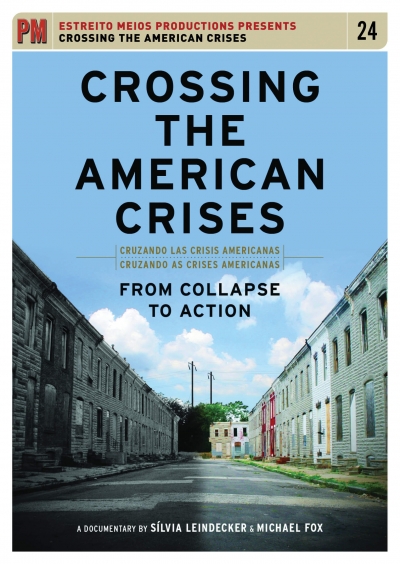 Crossing The American Crises: From Collapse to Action (DVD)

Michael Fox & Sílvia Leindecker
Change we can believe in? Travel with Michael Fox and Silvia Leindecker across the United States in 2008 and 2010 and hear the voices of the people impacted by the financial meltdown and its aftermath.

On September 15, 2008, the United States fell into the worst financial crisis since the Great Depression. The same day, we set out on a trip around the country to ask the American people what they had to say about it. In 2010, we went back to see how things had changed. The financial forecasters say the recession is over, but the reality is otherwise.

Their stories reveal desperation, indignation, hope, dreams and a disastrous economic breakdown; chaos generated by a system of inequality. But the financial meltdown is just one of several human rights crises now shaking the United States—in housing, education, health care, etc. The solutions to “Crossing the American Crises” are in the hands of the people.

About Michael Fox:
Michael Fox is a freelance journalist, reporter, and documentary filmmaker based in South America. He is the co-author of Venezuela Speaks!: Voices From The Grassroots. He is the producer of the weekly Venezuelanalysis radio headlines; co-founder of the internet radio, Radio Venezuela en Vivo; and co-director of the documentary, Beyond Elections: Redefining Democracy in the Americas released by PM Press.

About Sílvia Leindecker:
Sílvia Leindecker is a Brazilian documentary film maker who has shot for the Spanish news agency EFE, Germany’s Politik magazine, and co-director of the documentary, Beyond Elections: Redefining Democracy in the Americas released by PM Press.