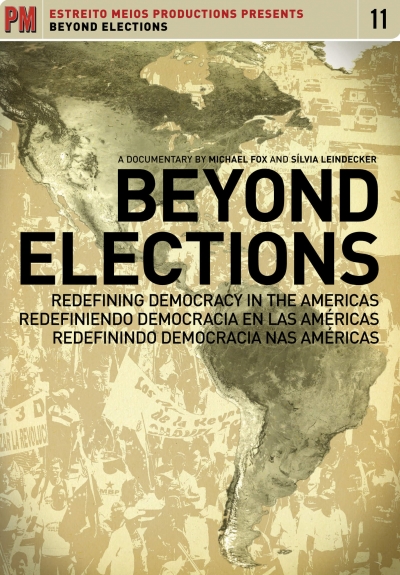 Beyond Elections: Redefining Democracy in the Americas (DVD)

by Sílvia Leindecker and Michael Fox
Beyond Elections is a journey that takes us across the Americas to attempt to answer one of the most important questions of our time: What is democracy?

What is democracy? Freedom, equality, participation? Everyone has his or her own definition. Across the world, 120 countries now have at least the minimum trappings of democracy—the freedom to vote for all citizens. But for many, this is just the beginning not the end. Following decades of US-backed dictatorships, civil wars and devastating structural adjustment policies in the South, and corporate control, electoral corruption, and fraud in the North, representative politics in the Americas is in crisis. Citizens are now choosing to redefine democracy under their own terms: local, direct, and participatory.

In 1989, the Brazilian Worker’s Party altered the concept of local government when they installed participatory budgeting in Porto Alegre, allowing residents to participate directly in the allocation of city funds. Ten years later, Venezuelan President Hugo Chavez was swept into power with the promise of granting direct participation to the Venezuelan people; who have now formed tens of thousands of self-organized communal councils. In the Southern Cone, cooperative and recuperated factory numbers have grown, and across the Americas social movements and constitutional assemblies are taking authority away from the ruling elites and putting power into the hands of their members and citizens.

Beyond Elections is a journey that takes us across the Americas to attempt to answer one of the most important questions of our time: What is democracy?

Extras include video, audio, and resource materials on participatory democracy.

Reviews:
“Beyond Elections proves that democracy can and should be more than casting a ballot every four years. This empowering documentary gives hopeful and concrete examples from around the Americas of people taking back the reigns of power and governing their own communities. Beyond Elections is a road map for social change, drawing from communal councils in Venezuela and social movements in Bolivia to participatory budgeting in Brazil and worker cooperatives in Argentina. The film gracefully succeeds in demonstrating that these grassroots examples of people’s power can be applied anywhere. Particularly as activists in the US face the challenges of a Obama administration and an economic crisis, this timely documentary shows that the revolution can start today right in your own living room or neighborhood.” –Ben Dangl, author of The Price of Fire and editor of  the websites Upside Down World and Toward Freedom

About Michael Fox:
Michael Fox is a freelance journalist, translator, reporter and documentary filmmaker based in South America. He is a former staff reporter for Venezuelanlaysis, a radio correspondent for Free Speech Radio News, and his articles have been published with Yes Magazine, Earth Island Journal, NACLA and The Nation online.

See and hear author interviews, book/film reviews, and other news on the Author’s Page HERE.