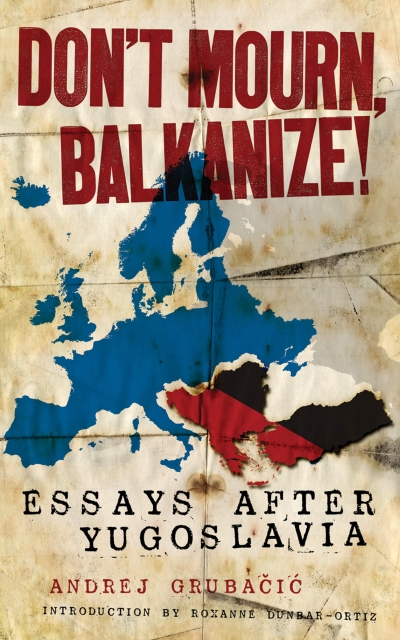 This collection of essays, commentaries and interviews represents the first book written from the radical left perspective on the topic of Yugoslav space after the dismantling of the country.

Don’t Mourn, Balkanize! Is the first book written from the radical left perspective on the topic of Yugoslav space after the dismantling of the country. In this collection of essays, commentaries and interviews, written between 2002 and 2010, Andrej Grubacic speaks about the politics of balkanization—about the trial of Slobodan Milosevic, the assassination of Prime Minister Zoran Djindjic, neoliberal structural adjustment, humanitarian intervention, supervised independence of Kosovo, occupation of Bosnia, and other episodes of Power which he situates in the long historical context of colonialism, conquest and intervention.

But he also tells the story of the balkanization of politics, of the Balkans seen from below. A space of bogumils—those medieval heretics who fought against Crusades and churches—and a place of anti-Ottoman resistance; a home to hajduks and klefti, pirates and rebels; a refuge of feminists and socialists, of anti-fascists and partisans; of new social movements of occupied and recovered factories; a place of dreamers of all sorts struggling both against provincial “peninsularity” as well as against occupations, foreign interventions and that process which is now, in a strange inversion of history, often described by that fashionable term, “balkanization.”

For Grubacic, political activist and radical sociologist, Yugoslavia was never just a country—it was an idea. Like the Balkans itself, it was a project of inter-ethnic co-existence, a trans-ethnic and pluricultural space of many diverse worlds. Political ideas of inter-ethnic cooperation and mutual aid as we had known them in Yugoslavia were destroyed by the beginning of the 1990s—disappeared in the combined madness of ethno-nationalist hysteria and humanitarian imperialism. This remarkable collection chronicles political experiences of the author who is himself a Yugoslav, a man without a country; but also, as an anarchist, a man without a state. This book is an important reading for those on the Left who are struggling to understand the intertwined legacy of inter-ethnic conflict and inter-ethnic solidarity in contemporary, post-Yugoslav history.

“These thoughtful essays offer us a vivid picture of the Balkans experience from the inside, with its richness and complexity, tragedy and hope, and lessons from which we can all draw inspiration and insight.”

“The history of Yugoslavia is of global relevance, and there’s no one better placed to reveal, share, and analyse it than Andrej Grubacic. From the struggle of the Roma to the liberating possibilities of ‘federalism from below,’ this collection of essays is required and radical reading.”

“This book of essays shows a deep grasp of Yugoslav history and social theory. It is a groundbreaking book, representing a bold departure from existing ideas, and an imaginative view to how a just society in the Balkans might be constructed.”

—Howard Zinn, author of A People’s History of the United States

“I cannot think of another work that even tries to accomplish what Andrej Grubacic has artfully undertaken in this volume. Don’t Mourn, Balkanize! is the first radical account of Yugoslav history after Yugoslavia, surveying this complex history with imagination and insight. Grubacic’s book provides essential information and perspective for all those interested in the recent history of this part of the world.”

“Andrej Grubacic is a rare genuine authority on the recent history and politics of the Balkans. I have known him for a decade, have followed and read his work with profit, and corresponded with him on matters which I found difficult in doing my own writing in this field.”

Andrej Grubacic is a dissident from the Balkans. A radical historian and sociologist, he is the co-author of Wobblies and Zapatistas and editor of The Staughton Lynd Reader. A fellow traveler of Zapatista-inspired direct action movements, in particular Peoples’ Global Action, and a co-founder of Global Balkans Network and Balkan Z Magazine, he is a visiting professor of sociology at the University of San Francisco.

Roxanne Dunbar-Ortiz is a historian and professor in the Department of Ethnic Studies at California State University, Hayward. She is the author of Red Dirt: Growing up Okie, The Great Sioux Nation, and Roots of Resistance, among other books.