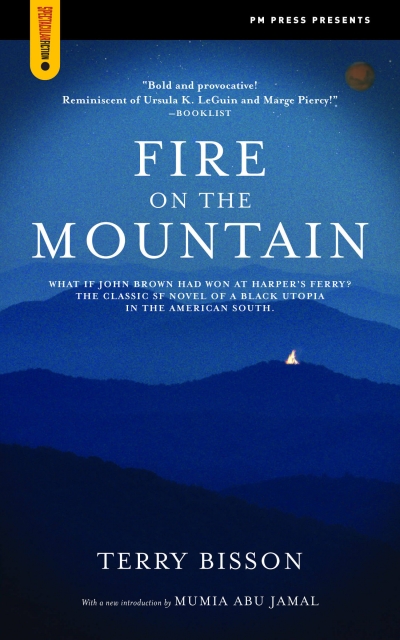 Fire on the Mountain

Presenting an alternative version of African American history, this novel explores what might have happened if John Brown’s 1859 raid on Harper’s Ferry had been successful.

It’s 1959 in socialist Virginia. The Deep South is an independent Black nation called Nova Africa. The second Mars expedition is about to touch down on the red planet. And a pregnant scientist is climbing the Blue Ridge in search of her great-great grandfather, a teenage slave who fought with John Brown and Harriet Tubman’s guerrilla army.

Long unavailable in the U.S., published in France as Nova Africa, Fire on the Mountain is the story of what might have happened if John Brown’s raid on Harper’s Ferry had succeeded—and the Civil War had been started not by the slave owners but the abolitionists.

About the Author:
Terry Bisson, who was for many years a Kentuckian living in New York City, is now a New Yorker living in California. In addition to science fiction, he has written biographies of Mumia Abu-Jamal and Nat Turner. He is also the host of a popular San Francisco reading series (SFinSF) and the Editor of PM’s new Outspoken Authors pocketbook series.

About Mumia Abu Jamal:
Mumia Abu-Jamal was convicted and sentenced to death for the 1981 murder of a police officer. Prior to his arrest he was a Black Panther Party activist, cab driver, and journalist. Since his conviction, his case has received international attention and he has become a controversial cultural icon. During his imprisonment he has published several books including Live from Death Row.