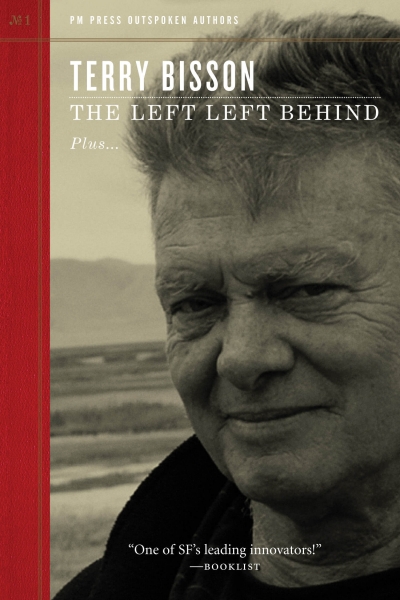 The Left Left Behind

Sardonic and merciless, this satire of the entire apocalyptic enterprise provides a humorous and timely interpretation of the bestselling Left Behind series.

Hugo and Nebula award-winner Terry Bisson is best known for his short stories, which range from the southern sweetness of “Bears Discover Fire” to the alienated aliens of “They’re Made Out of Meat.” He is also a 1960’s New Left vet with a history of activism and an intact (if battered) radical ideology.

The Left Behind novels (about the so-called “Rapture” in which all the born-agains ascend straight to heaven) are among the bestselling Christian books in the United States, describing in lurid detail the adventures of those “left behind” to battle the Anti-Christ. Put Bisson and the born-agains together, and what do you get? The Left Left Behind–a sardonic, merciless, tasteless, take-no-prisoners satire of the entire apocalyptic enterprise that spares no one–predatory preachers, goth lingerie, Pacifica Radio, Indian casinos, gangsta rap, and even “art cars” at Burning Man.

Plus: “Special Relativity,” a one-act drama that answers the question: When Albert Einstein, Paul Robeson, and J. Edgar Hoover are raised from the dead at an anti-Bush rally, which one wears the dress? As with all Outspoken Author books, there is a deep interview and autobiography: at length, in-depth, no-holds-barred and all-bets off: an extended tour through the mind and work, the history and politics of our Outspoken Author. Surprises are promised.

Terry Bisson, who was for many years a Kentuckian living in New York City, is now a New Yorker living in California. In addition to his Hugo and Nebula award winning science fiction, he has written bios of Mumia Abu-Jamal and Nat Turner. He is also the host of a popular San Francisco reading series (SFinSF) and the Editor of PM’s new Outspoken Authors pocketbook series.