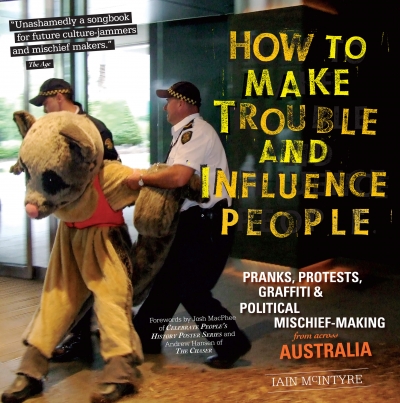 How to Make Trouble and Influence People:

Iain McIntyre is a Melbourne-based author, musician, and community radio broadcaster who has written a variety of books on activism, history, and music. Recent publications include Wild About You: The Sixties Beat Explosion in Australia and New Zealand, and Tomorrow Is Today: Australia in the Psychedelic Era, 1966-70.

Andrew Hansen is a Sydney based comedian and musician, best known for being a member of satirical team The Chaser who have produced six award winning television series for Australian television.

Josh MacPhee  is a designer, artist, activist, and archivist. He is a member of both the Justseeds Artists’ Cooperative (Justseeds.org) and the Occuprint collective (Occuprint.org). He is the coauthor of Signs of Change: Social Movement Cultures 1960s to Now, coeditor of Signal: A Journal of International Political Graphics & Culture, and he recently cofounded the Interference Archive, a public collection of cultural materials produced by social movements (InterferenceArchive.org).

See and hear author interviews, book reviews, and other news on the Iain McIntyre’s Page HERE