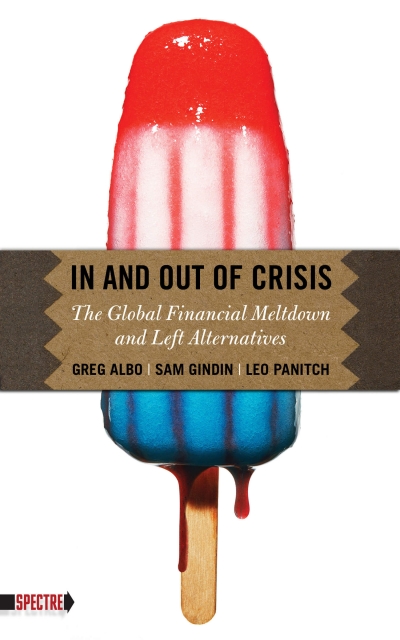 In and Out of Crisis: The Global Financial Meltdown and Left Alternatives

In and Out of Crisis stands to be the enduring critique of the crisis and an indispensable springboard for a renewed Left.

Our world is in the grips of the most calamitous economic crisis since the Great Depression – and its epicenter is the imperial United States, where hallowed investment banks have disappeared overnight, giants of industry have gone bankrupt, and the financial order has been shaken to the core.

While many around the globe are increasingly wondering if another world is indeed possible, few are mapping out potential avenues – and flagging wrong turns – en route to a post-capitalist future. In this groundbreaking analysis of the meltdown, renowned radical political economists Albo, Gindin, and Panitch lay bare the roots of the crisis, which they locate in the dynamic expansion of capital on a global scale over the last quarter century – and in the inner logic of capitalism itself.

With an unparalleled understanding of the inner workings of capitalism, the authors of In and Out of Crisis provocatively challenge the call by much of the Left for a return to a largely mythical Golden Age of economic regulation as a check on finance capital unbound. They deftly illuminate how the era of neoliberal free markets has been, in practice, undergirded by state intervention on a massive scale. With clarity and erudition, they argue persuasively that given the current balance of social forces – as bank bailouts around the globe make evident – regulation is not a means of fundamentally reordering power in society, but rather a way of preserving markets.

Contrary to those who believe US hegemony is on the wane, Albo, Gindin, and Panitch contend that the meltdown has, in fact, reinforced the centrality of the American state as the dominant force within global capitalism, while simultaneously increasing the difficulties entailed in managing its imperial role.

In conclusion, the authors argue that it’s time to start thinking about genuinely transformative alternatives to capitalism – and how to build the collective capacity to get us there. We should be thinking bigger and preparing to go further. In and Out of Crisis stands to be the enduring critique of the crisis and an indispensable springboard for a renewed Left.

“Once again, Panitch, Gindin, and Albo show that they have few rivals and no betters in analyzing the relations between politics and economics, between globalization and American power, between theory and quotidian reality, and between crisis and political possibility. At once sobering and inspiring, this is one of the few pieces of writing that I’ve seen that’s essential to understanding – to paraphrase a term from accounting – the sources and uses of crisis. Splendid and essential.” –Doug Henwood, Left Business Observer, author of After the New Economy and Wall Street

“Mired in political despair? Planning your escape to a more humane continent? Baffled by the economy? Convinced that the Left is out of ideas? Pull yourself together and read this book, in which Albo, Gindin, and Panitch, some of the world’s sharpest living political economists, explain the current financial crisis – and how we might begin to make a better world.” –Liza Featherstone, author of Students Against Sweatshops and Selling Women Short: The Landmark Battle for Workers’ Rights at Wal-Mart

“In and Out of Crisis is a salutary reminder that knee-jerk reactions to current events are not the best way forward for the Left. What we need is careful investigation combined with practical experiences on campaigns to develop our movement. This book not only gives us a course in the global financial meltdown, but it also provides a model for how the Left must develop its alternatives, not ex nihilo, but from a study of the contradictions of the present.” –Vijay Prashad, author of The Darker Nations: A People’s History of the Third World

Leo Panitch teaches political economy at York University in Toronto and is co-editor of the Socialist Register.

Sam Gindin teaches political economy at York University in Toronto and is the former research director at the Canadian Autoworkers Unions.

Greg Albo teaches political economy at York University in Toronto and is co-editor of the Socialist Register.