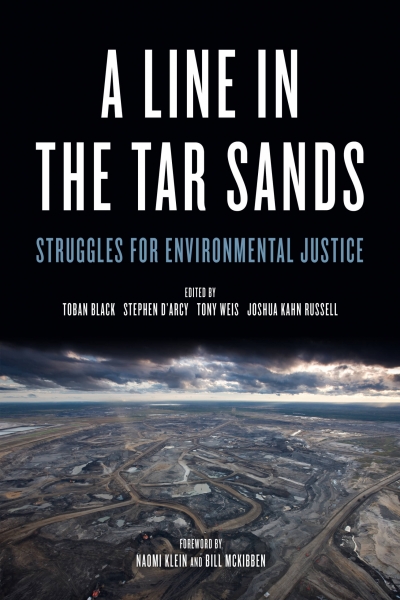 A Line in the Tar Sands: Struggles for Environmental Justice

This book offers a critical analysis of the impact of the tar sands and the challenges opponents face in their efforts to organize effective resistance.

The fight over the tar sands in North America is among the epic environmental and social justice battles of our time, and one of the first that has managed to quite explicitly marry concern for frontline communities and immediate local hazards with fear for the future of the entire planet.

Yet, despite the formidable political and economic power behind the tar sands, many opponents are actively building international networks of resistance, challenging pipeline plans while resisting threats to Indigenous sovereignty and democratic participation. Including leading voices involved in the struggle against the tar sands, A Line in the Tar Sands offers a critical analysis of the impact of the tar sands and the challenges opponents face in their efforts to organize effective resistance.

The editors’ proceeds from this book will be donated to frontline grassroots environmental justice groups and campaigns.

“The tar sands has become a key front in the fight against climate change, and the fight for a better future, and it’s hard to overstate the importance of the struggles it has inspired.”
—Naomi Klein and Bill McKibben

“Avoiding ‘game over for climate’ requires drawing a line in the tar sands sludge. A Line in the Tar Sands makes clear why and how this tar sands quagmire could be the beginning of the end for the mighty fossil fuel industry.”
—Dr. James Hansen, NASA

“From Indigenous people’s sharing of prophecy, to lock-downs and blockades, from marches to hip-hop tours, from horseback rides to hunger strikes, and from mass arrests in front of the White House and Parliament to court battles, A Line in the Tar Sands examines the ongoing struggle to protect Sacred Water and Mother Earth through the voices and actions of the people who are living it. Read A Line in the Tar Sands and be heartbroken to learn the extent of the destruction of Mother Earth. Be inspired by the people working to stop the destruction.”
—Debra White Plume, Moccasins on the Ground, Owe Aku International

“The most important stories in the tar sands struggle are hidden by the media. This revelatory book tells of Canadian duplicity, Chinese capital, migrant workers, healing ceremonies, movement reflection and strategy, EU lobbying, the contradictions of NGO politics, Indigenous activism, and much more. The story of Greenhouse Goo is global. But so it its resistance: beautiful, complex, and rich. A Line in the Tar Sands is drawn with hope and righteous anger, celebrating the cosmologies that the tar sands industry—and its politicians—would destroy.”
—Raj Patel, author of Stuffed and Starved