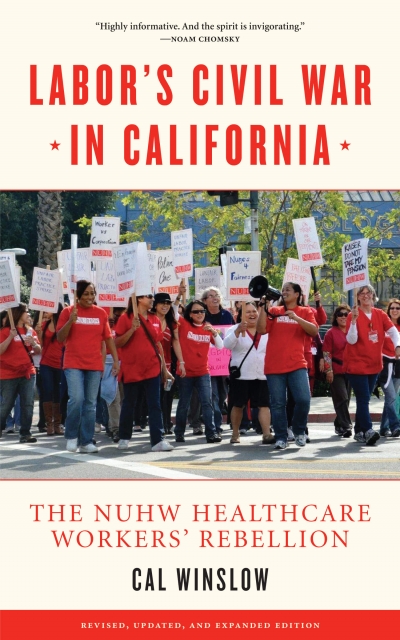 A moving and insightful account of the battle between “authoritarian, top-down collaborationists” and “bottom-up, rank and filers,” which illustrates the divide across the U.S. between different ways of organizing labor.

This book examines one of the most important labor conflicts in the United States today. In 2006 and 2007, disputes developed concerning the practice and direction of the 150,000 member healthcare workers union in California, United Healthcare Workers-West (UHW), with its “parent” organization, the Service Employees International Union (SEIU).

SEIU is the second largest union in the US, the fastest growing in recent years. It is a well-organized, well-financed organization, with an ambitious agenda. SEIU perspectives, while packaged as progressive, reject traditional union traditions and practices – union democracy and the idea of “class struggle” are replaced with class collaboration, and the union frequently “wheels and deals” directly with top management and politicians. In 2007 UHW rejected these perspectives and contested them within the union.

The SEIU international leadership retaliated by placing UHW in trusteeship, firing its officers, seizing its assets, and taking control of all union’s activities. UHW leaders and members responded by forming a new union, the National Union of Healthcare Workers (NUHW) and challenging the SEIU in virtually every unionized site in the state.

This California conflict—SEIU vs. NUHW—is no local brawl; it is not about personalities, it is not about West Coast eccentricities. Its significance is not confined to the fortunes of just one particular union. SEIU’s attack, however regrettable, is not the first such—nor will it be the last. The truth is that labor has always been divided, comprised of many currents. The truth is also that there are rights and wrongs in labor, as elsewhere, and that these can expose fundamental divides—in this case two contesting souls in the workers’ movement. These are sharply on display today in this dispute—the one soul authoritarian, top-down, collaborationist, the other bottom-up, rank-and-file, class conscious.

“The emergence of NUHW has been one of the most exciting recent developments in US labor. From the ashes of the old, health care workers in California are trying to build something that’s new, different, and definitely worth fighting for. Cal Winslow’s account of their difficult struggle is moving and insightful-—and maybe even a road map for others to follow.”

“Highly informative. And the spirit is invigorating.”

“The civil war inside the SEIU is a tragic story, yet as Cal Winslow emphasizes in this urgent and dramatic account, it may contain the seeds of authentic renewal in the American labor movement.”

“Strange tales from the gothic wing of the capitalist health industry, complete with vampires and leeches. In this instant classic of journalism from below, one of the pioneers of radical social history reports on remarkable signs of life in the morbid body of American labor.”

Cal Winslow, PhD., is an historian, trained at Warwick University under the direction of the late E.P. Thompson. He is a co-author, along with Thompson and others of Albion’s Fatal Tree. He is a fellow in Environmental Politics at UC Berkeley and Director of the Mendocino Institute. He is co-editor of Rebel Rank and File, Labor Militancy in the Long Seventies (Verso). He lives with his family on the Mendocino Coast. His daughter, Samantha Winslow, worked as an organizer for UHW from 2004 through 2009; as a staff member she was a founder of NUHW.