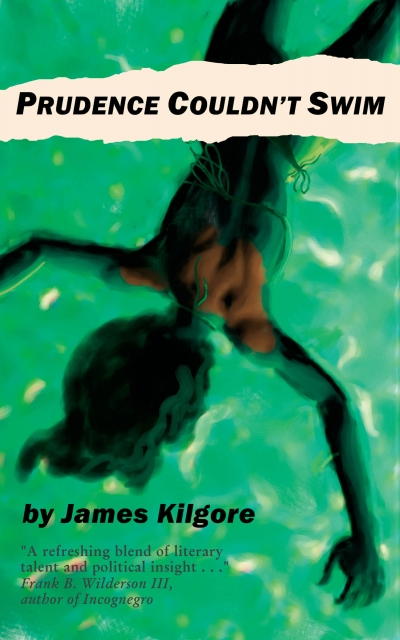 White ex-convict Cal Winter returns to his home in Oakland, California, one day to find his gorgeous, young, black wife, Prudence, drowned in the swimming pool. Prudence couldn’t swim, and Cal concludes she didn’t go in the water willingly. Though theirs was a marriage of convenience, he takes the murder personally. Along with his prison homie Red Eye, Cal sets out to find out who did Prudence in. His convoluted and often darkly humorous journey takes him deep into the world of the sexual urges of the rich and powerful, and gradually reveals the many layers of his wife’s complex identity. While doing so, Cal and Red Eye must confront their own racially charged pasts if the killer is to be caught.

Author James Kilgore has woven together strands of his own quixotic and complicated life—twenty-seven years as a political fugitive, two decades as a teacher in Africa, and six years in prison—into a heady tale of mystery and consequences.

Praise:
“James Kilgore’s writing is a refreshing blend of literary talent and political insight; something sorely missing from much of the fiction penned by writers on the Left. His wit, swift pacing, and dead-on characterization are skillfully woven into an unflinching vision for radical change and social justice. So often we are told that a commitment to radical change and a rollicking good read mix like oil and water. Along comes Kilgore to put that lie to rest!”  —Frank B. Wilderson III, author of Incognegro: A Memoir of Exile and Apartheid

“James Kilgore is a masterful writer, and as a U.S. activist who has lived in Africa most of his adult life, Kilgore is able to connect us to politics and culture as no other writer. This character-driven mystery promises to find a devoted following.”  —Roxanne Dunbar-Ortiz, author of Blood on the Border: A Memoir of the Contra War.

About the Author:
James Kilgore was a 1960s political activist in California, ultimately becoming involved with the Symbionese Liberation Army. In 1975, he fled a Federal explosives charge and remained a fugitive for 27 years. During that time he rejected the politics of small group violence, and built a life as an educator, researcher, activist, parent, and partner in southern Africa. In 2002 he was arrested in Cape Town, and served six and a half years in California prisons. While incarcerated he wrote Prudence Couldn’t Swim, as well as We Are All Zimbabweans Now (Umuzi, 2009), and Freedom Never Rests (Jacana, 2011). Kilgore presently lives in Illinois with his wife and sons. He is a Research Scholar in the Center for African Studies at the University of Illinois.