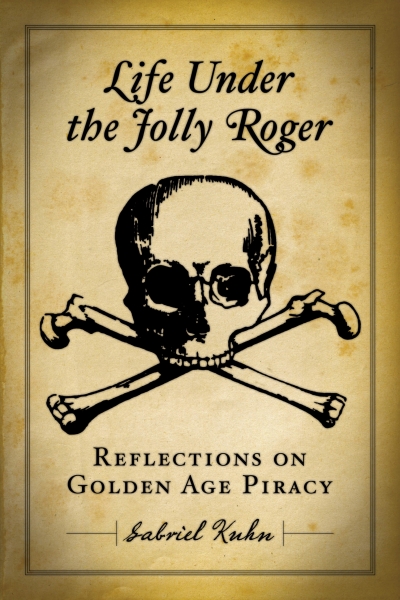 A fascinating study of the “golden age” pirates who roamed the seas between the Caribbean Islands and the Indian Ocean from 1690 to 1725.

Over the last couple of decades an ideological battle has raged over the political legacy and cultural symbolism of the “golden age” pirates who roamed the seas between the Caribbean Islands and the Indian Ocean from 1690 to 1725. They are depicted as romanticized villains on the one hand, and as genuine social rebels on the other. Life Under the Jolly Roger examines the political and cultural significance of these nomadic outlaws by relating historical accounts to a wide range of theoretical concepts–reaching from Marshall Sahlins and Pierre Clastres to Mao-Tse Tung and Eric J. Hobsbawm via Friedrich Nietzsche and Michel Foucault. The meanings of race, gender, sexuality and disability in golden age pirate communities are analyzed and contextualized, as are the pirates’ forms of organization, economy and ethics.

While providing an extensive catalog of scholarly references for the academic reader, this delightful and engaging study is directed at a wide audience and demands no other requirements than a love for pirates, daring theoretical speculation and passionate, yet respectful, inquiry.

“In the golden age of piracy thousands plied the seas in egalitarian and communal alternatives to the piratical age of gold. The last gasps of the hundreds who were hanged and the blood-curdling cries of the thousands traded as slaves inflated the speculative financial bubbles of empire putting an end to these Robin Hoods of the deep seas. In addition to history, Gabriel Kuhn’s radical piratology brings philosophy, ethnography, and cultural studies to the stark question of the time: which were the criminals—bankers and brokers or sailors and slaves? By so doing he supplies us with another case where the history isn’t dead, it’s not even past! Onwards to health-care by eye-patch, peg-leg, and hook!” –Peter Linebaugh, author of The London Hanged, co-author of The Many-Headed Hydra

“Life Under the Jolly Roger will appeal to anyone interested in pirates and radical practice. It brings the golden age of piracy to life and shows us the link to contemporary radical politics. I recommend this book to those who identify with pirates and seek a well-reasoned analysis of their legacy.”  –Luis A. Fernandez, author of Policing Dissent

“Piracy is as relevant in today’s world as it ever was, and if you want to understand why it happens and what it really means, this is the book to start with. While modern-day robber barons give pirating a bad name, this important book restores the balance through a lively and provocative narrative.  Definitely one to read, and to treasure!” –Randall Amster, professor of Peace Studies at Prescott College, Arizona

“It is rare to find a book that is not only entertaining, but broadens your knowledge as well. More rare even, a book that not only enhances your knowledge but also your perspective: this is the first time the subject of pirates has been analyzed using such a variety of theories, each of which lets you see history and its stories from a different angle. Even if you think you could never be interested in the history of pirates, take a look at this book and you will be.” –Nora Räthzel, professor of Sociology at the University of Umeå, Sweden