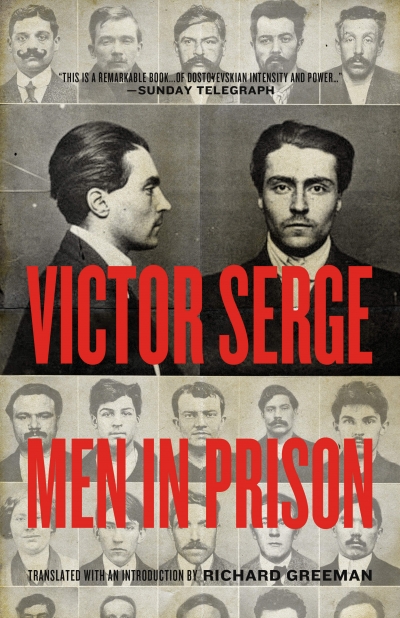 Everything in this book is fictional and everything is true. I have attempted, through literary creation, to bring out the general meaning and human content of a personal experience.

“Everything in this book is fictional and everything is true,” wrote Victor Serge in the epigraph to Men in Prison. “I have attempted, through literary creation, to bring out the general meaning and human content of a personal experience.”

The author of Men in Prison served five years in French penitentiaries (1912-1917) for the crime of “criminal association”—in fact for his courageous refusal to testify against his old comrades, the infamous “Tragic Bandits” of French anarchism. “While I was still in prison,” Serge later recalled, “fighting off tuberculosis, insanity, depression, the spiritual poverty of the men, the brutality of the regulations, I already saw one kind of justification of that infernal voyage in the possibility of describing it. Among the thousands who suffer and are crushed in prison—and how few men really know that prison!—I was perhaps the only one who could try one day to tell all… There is no novelist’s hero in this novel, unless that terrible machine, prison, is its real hero. It is not about ‘me,’ about a few men, but about men, all men crushed in that dark corner of society.”

Ironically, Serge returned to writing upon his release from a GPU prison in Soviet Russia, where he was arrested as an anti-Stalinist subversive in 1928. He completed Men in Prison (and two other novels) in “semi-captivity” before he was rearrested and deported to the Gulag in 1933. Serge’s classic prison novel has been compared to Dostoyevsky’s House of the Dead, Koestler’s Spanish Testament, Genet’s Miracle of the Rose, and Solzhenitsyn’s One Day in the Life of Ivan Denisovitch both for its authenticity and its artistic achievement.

This edition features a substantial new introduction by translator Richard Greeman, situating the work in Serge’s life and times.

About Victor Serge:
Victor Serge (1890-1947) was born to Russian anti-Tsarist exiles living in Brussels. As a young anarchist firebrand, he was sentenced to five years in a French penitentiary in 1912. In 1919, Serge joined the Bolsheviks. An outspoken critic of Stalin, he was expelled from the Party and arrested in 1929. Nonetheless, he managed to complete three novels (Men in Prison, Birth of Our Power, and Conquered City) and a history (Year One of the Russian Revolution), published in Paris. Arrested again in Russia and deported to Central Asia in 1933, he was allowed to leave the USSR in 1936 after international protests by militants and prominent writers such as André Gide and Romain Rolland. Hounded by Stalinist agents, Serge lived in precarious exile in Brussels, Paris, Vichy France, and Mexico City, where he died in 1947.

About Richard Greeman:
Richard Greeman has translated and written the introductions for five of Victor Serge’s novels. Cofounder of the Praxis Center and Victor Serge Library in Moscow, Greeman is the author of Beware of Vegetarian Sharks: Radical Rants and Internationalist Essays.