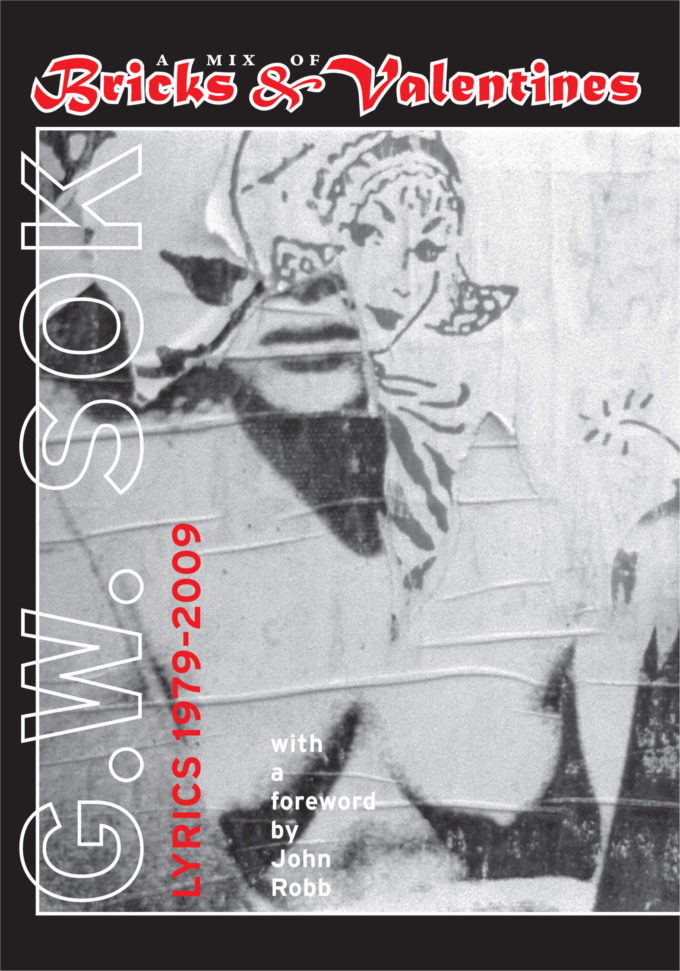 With a foreword by John Robb, this book showcases the lyrics of G.W. Sok from The Ex.

.W. Sok co-founded of the internationally acclaimed independent Dutch music group The Ex in 1979. He became the singer and lyricist, more or less by coincidence, since he wrote the occasional poem and nobody else wanted to sing. At the same time he turned himself into a graphic designer of record sleeves, posters, and books. Together with The Ex he was awarded the Dutch Pop Prize of 1991. The band is well known for their energetic live performances, inventive music, and politically outspoken and thought-provoking lyrics. After 1,400 concerts in Holland and abroad, and 25 record albums later, G.W. Sok decided to leave the group at the end of 2008.

A Mix of Bricks & Valentines showcases the lyrics G.W. Sok wrote during his three-decade period of Ex-istence. More than 250 songs of agitprop lyrics, poetry, and rantings are included along with an introduction by the author discussing his development as a writer. A foreword by English journalist, author, and musician John Robb (the Membranes, Punk: An Oral History and Death to Trad Rock) puts the work of G.W. Sok into perspective.

A Mix of Bricks & Valentines is written with a sharp pen; provocative, creative, and witty, everything punk and art intended to be from the start. And yes, it can be quite loud at times, too

“Lyrically, The Ex is also in a class of its own. This is rebel punk’s finest hour.”  —SF Weekly

“Deep intellectual analysis of geopolitics and fearless insertion of their socio-anarchist perspective is a bold, defining path drawn by The Ex. Few of their peers, either in their nascent days in the late ’70s and early ’80s, or now amidst all the emo-punk caterwaulers, have equaled this loud, defiant cry.”  —Pop Matters

“There has always been space in The Ex’s music, space filled by singer G.W. Sok with socially engaged lyrics, which, from the very start, transcend by far the sloganesque tongue of most of his punk peers.”  —HUMO

“Lyrics with insightful socio-political standpoints. They are influential, provocative, creative, perceptive, and above all defy categorization. Everything punk & art intended to be from the start prior to being commodified.”  —KJFC

G.W. Sok is a co-founder of the music-group The Ex, and was their vocalist/lyricist from 1979-2009. Together they played almost 1,400 concerts and released 25 albums. Currently he is a graphic designer, actor, and musician, playing with the Amsterdam-based guitar-duo Two Pin Din and with the French trio Cannibales & Vahinés.