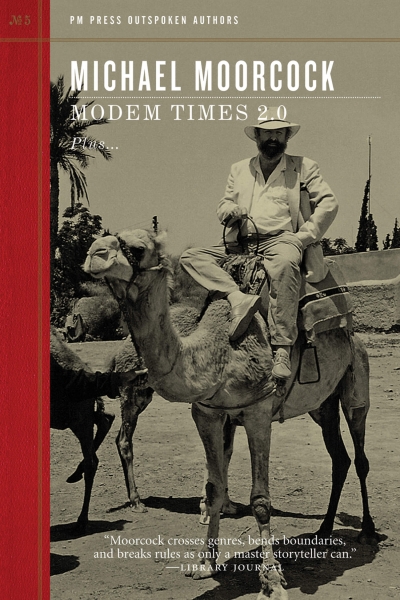 Moorcock’s most audacious creation, Jerry Cornelius – assassin, rock star, chronospy, and maybe-Messiah – is back with a time twisting odyssey. that connects ’60s London with post-Obama America.

Moorcock’s own literary accomplishments include his classic Mother London, a romp through urban history conducted by psychic outsiders; his comic Pyat quartet, in which a Jewish antisemite examines the roots of the Nazi Holocaust; Behold The Man, the tale of a time tourist who fills in for Christ on the cross; and of course the eternal hero Elric, swordswinger, hellbringer and bestseller.

And now Moorcock’s most audacious creation, Jerry Cornelius–assassin, rock star, chronospy and maybe-Messiah–is back in Modem Times 2.0, a time-twisting odyssey that connects 60s London with post-Obama America, with stops in Palm Springs and Guantanamo. Modem Times 2.0 is Moorcock at his most outrageously readable–a masterful mix of erudition and subversion.

Plus: the non-fiction essay “My Londons” and an Outspoken Interview with literature’s authentic Lord of Misrule.

About the Author:
Born in London and raised on Mars, (or so he claims) Michael Moorcock is perhaps the single most important figure in modern Science Fiction, and the most unlikely to get an O.B.E. The author of over seventy novels and countless stories, essays, comics, screeds and rants, he lives in Texas.