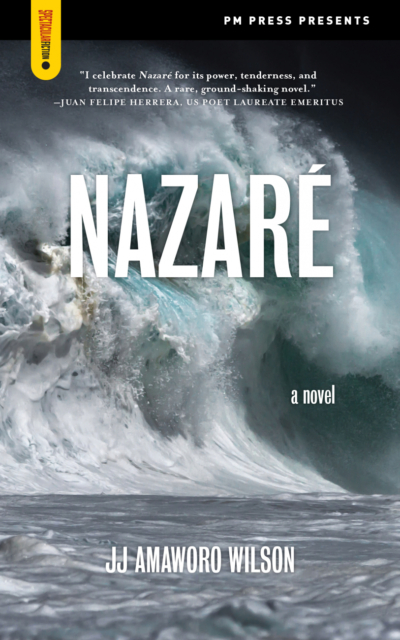 JJ Amaworo Wilson
Nazaré is an adventure and a parable that pits the oppressed against the oppressor as Kin’s world is radically changed by a tsunami and people struggle to regain their positions after the great wave.

Nazaré: the great wave. Kin, an orphan scavenger in the Fishing Village with No Name, finds a stranded whale on the beach and tries to return it to the ocean. His efforts attract the attention of Mayor Matanza and his bloodthirsty police, the Tonto Macoute, and Kin must leave the only home he’s ever known. His journeys take him to an abandoned lighthouse, through singing caves and brutal deserts, and finally to a village of warrior historians.

There he meets the Professor and others who are preparing to overthrow Matanza. They are joined by Jesa, a woman from Kin’s village who might be a witch, and the nun Iquique. Their revolution is unlike any other, fought by tinkers and miners, monks and acrobats, clairvoyants in bowler hats, a painted saint, the King of the Rats, and a giant turtle named Abacaxi. The holy man Fundogu once told Kin, “You will do battle with monsters and you will do battle with men.” As Fundogu’s prophecy takes shape around him, Kin remembers another of Fundogu’s sayings: “Everything begins and ends in the sea”