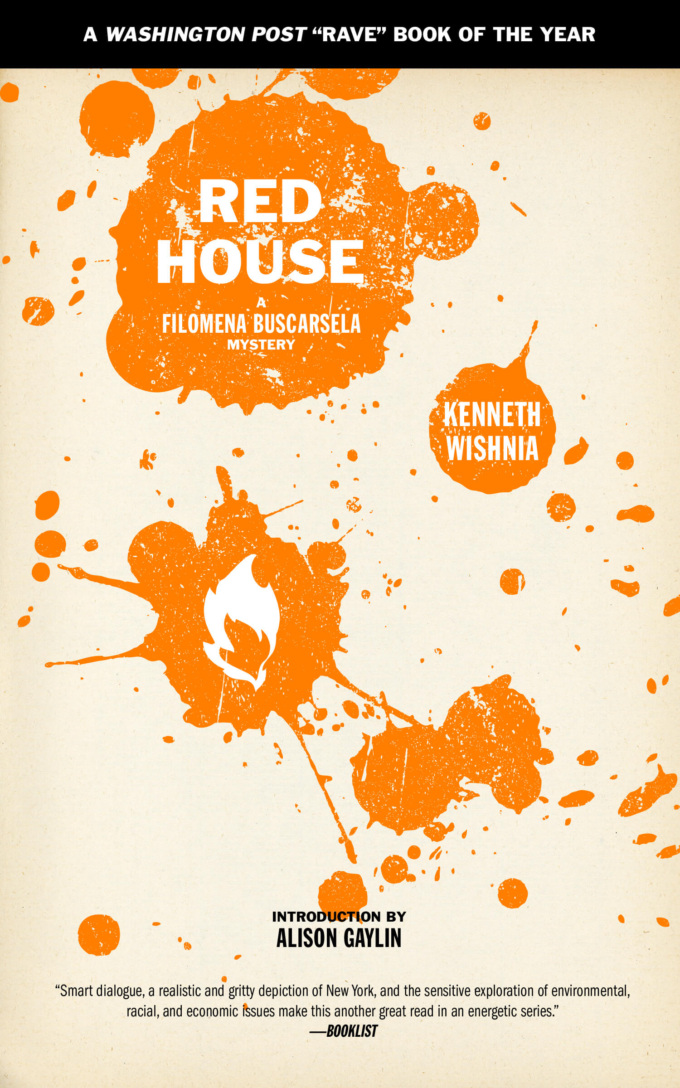 First she was a beat cop, then she was unemployed. Now, Kenneth Wishnia’s dynamic Filomena Buscarsela has apprenticed herself to a New York City PI firm to put in the three years necessary to get her own PI license, which she needs to earn enough money to support herself and her daughter. Trouble is, she often agrees to take on sticky neighborhood cases pro bono—like the group of squatters restoring an abandoned building in the neighborhood—rather than handle the big-bucks clients her bosses would prefer.

While helping out her more “senior” colleagues with her own superior investigative techniques bred from years on the beat, Fil agrees to look into the disappearance of a young immigrant. Then, witnessing the arrest of a neighbor on marijuana-possession charges that nearly turns into a shoot-out with the police, Fil is roped into finding out what went wrong. Trying to balance charity cases like these with bread-and-butter cases, not to mention single motherhood, Fil is quickly in over her head dodging bullish cops, aggressive businessmen, and corrupt landlords in their working-class Queens neighborhood.

After years of policing and backstreet bloodhounding, Filomena Buscarsela is apprenticing to earn her own private investigator’s license. She pours on her Spanish, her clever tricks, and her battle-tested charms to uncover a labyrinth of deceit, racial prejudice, and impenetrable bureaucracy that not only rocks her neighborhood but also threatens the foundation of the big red house that is this PI’s America.

Kenneth Wishnia’s novels include 23 Shades of Black, an Edgar Allan Poe Award and Anthony Award finalist; Soft Money, a Library Journal Best Mystery of the Year; and Red House, a Washington Post “Rave” Book of the Year and The Fifth Servant, an Indie Notable selection, a Jewish Press Best Mystery of the Year, winner of a Premio Letterario ADEI-WIZO, and a finalist for the Sue Feder Memorial Historical Mystery Award. His short stories have appeared in Ellery Queen, Alfred Hitchcock, Queens Noir, Long Island Noir, Send My Love and a Molotov Cocktail, and elsewhere. His latest novel, The Fifth Servant, was an Indie Notable selection, a Best Jewish Book of the Year according to the Association of Jewish Libraries, won a Premio Letterario ADEI-WIZO (the Italian chapter of the Women’s International Zionist Organization), and was a finalist for the Sue Feder Memorial Historical Mystery Award, a category of the Macavity Awards. Most recently, he edited the Anthony Award-nominated anthology Jewish Noir for PM Press. He teaches writing, literature and other deviant forms of thought at Suffolk Community College on Long Island.

Alison Gaylin’s debut novel, Hide Your Eyes, was nominated for an Edgar Award in the Best First Novel category. Her 2012 novel, And She Was, was the first in a new series featuring Brenna Spector, a private investigator blessed (and cursed) with perfect autobiographical memory, and was a USA Today bestseller.