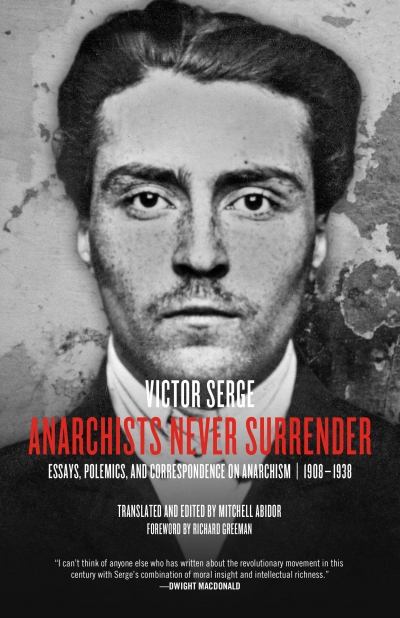 Anarchists Never Surrender provides a complete picture of Victor Serge’s relationship to anarchism. The volume contains writings going back to his teenage years in Brussels, where he became influenced by the doctrine of individualist anarchism. At the heart of the anthology are key articles written soon after his arrival in Paris in 1909, when he became editor of the newspaper l’anarchie. In these articles Serge develops and debates his own radical thoughts, arguing the futility of mass action and embracing “illegalism.” Serge’s involvement with the notorious French group of anarchist armed robbers, the Bonnot Gang, landed him in prison for the first time in 1912. Anarchists Never Surrender includes both his prison correspondence with his anarchist comrade Émile Armand and articles written immediately after his release.

The book also includes several articles and letters written by Serge after he had left anarchism behind and joined the Russian Bolsheviks in 1919. Here Serge analyzed anarchism and the ways in which he hoped anarchism would leaven the harshness and dictatorial tendencies of Bolshevism. Included here are writings on anarchist theory and history, Bakunin, the Spanish revolution, and the Kronstadt uprising.

Anarchists Never Surrender anthologizes Victor Serge’s previously unavailable texts on anarchism and fleshes out the portrait of this brilliant writer and thinker, a man I.F. Stone called one of the “moral figures of our time.”

Mitchell Abidor is the principal French translator for the Marxists Internet Archive and has published two collections of his translations, The Great Anger: Ultra-Revolutionary Writing in France from the Atheist Priest to the Bonnot Gang and Communards: The Story of the Paris Commune of 1871 as Told by Those Who Fought for It. He is currently working on translations of further unpublished works by Victor Serge and Daniel Guérin.

Richard Greeman is best known as the translator and prefacer of five of Victor Serge’s seven novels, most recently Men in Prison (PM Press). He is a founding member of the libertarian socialist Praxis Center in Moscow and Secretary of the Victor Serge Foundation, which supports the Victor Serge Libraries in Moscow and Kiev and underwrites translations and publication of Serge’s books in Russian and Arabic. Greeman has published literary, political, and biographical studies of Serge in English, French, Russian, and Spanish as well as prefaces to French editions of Serge’s books.

See and hear author interviews, book reviews, and other news on the Victor Serge’s page HERE

See and hear editor interviews, book reviews, and other news on the Mitchell Abidor’s page HERE