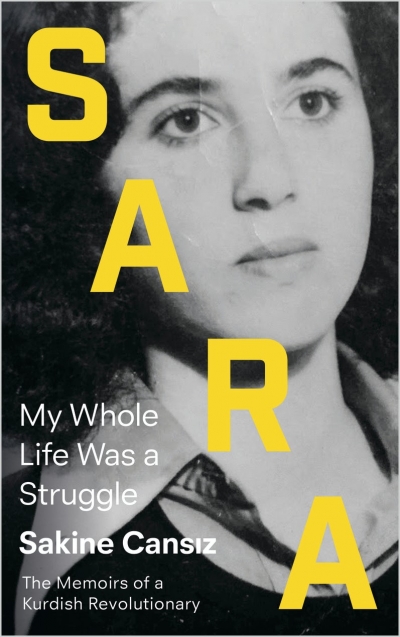 Sara: My Whole Life Was a Struggle

An iconic memoir by one of the first female fighters of the PKK.

The bitter struggle of the Kurdistan Workers’ Party, or PKK, against the Turkish state has delivered inspirational but often tragic stories. This memoir by Kurdish revolutionary Sakine Cansiz is one of them. Sakine, whose code name was ‘Sara’, co-founded the PKK in 1974 and dedicated her life to its cause. On the 9th January 2013 she was assassinated in Paris in circumstances that remain officially unresolved.

This is the first chapter of her iconic life, leading up to her arrest in 1979, penned as dramatic events unfolded against the backdrop of the Turkish revolutionary left. She writes about the excitement of entering the movement as a young woman, discovering she would have to challenge traditional gender roles as she rose amongst its ranks. She was one of the first to demand the recruitment and education of female revolutionaries, and demanded total gender equality within the PKK, which is now one of its central tenets.

Today, ‘Sara’ is an inspiration to women fighting for liberation across the world. This is her story in her own words, and is in turns shocking, violent and path-breaking.

About the Author:
Sakine Cansiz was a Kurdish revolutionary, who was a leading member of the PKK, present at its first congress of 1978. She was imprisoned between 1980 and 1991 for her membership of the PKK. A close associate of Abdullah Öcalan, she was murdered in Paris in 2013.