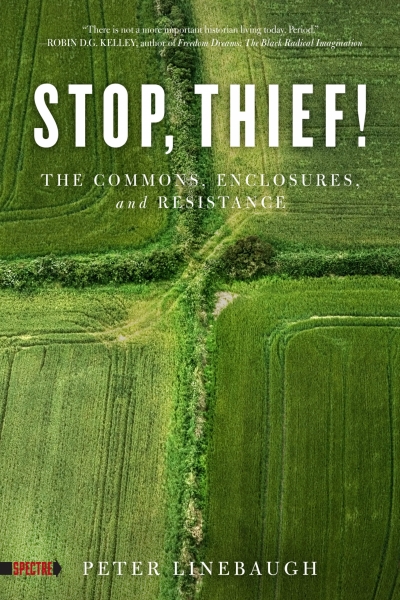 This majestic tour de force takes aim at the thieves of land, the polluters of the seas, the ravagers of the forests, the despoilers of rivers, and the removers of mountaintops.

In this majestic tour de force, celebrated historian Peter Linebaugh takes aim at the thieves of land, the polluters of the seas, the ravagers of the forests, the despoilers of rivers, and the removers of mountaintops. Scarcely a society has existed on the face of the earth that has not had commoning at its heart. “Neither the state nor the market,” say the planetary commoners. These essays kindle the embers of memory to ignite our future commons.

From Thomas Paine to the Luddites, from Karl Marx—who concluded his great study of capitalism with the enclosure of commons—to the practical dreamer William Morris—who made communism into a verb and advocated communizing industry and agriculture—to the 20th-century communist historian E.P. Thompson, Linebaugh brings to life the vital commonist tradition. He traces the red thread from the great revolt of commoners in 1381 to the enclosures of Ireland, and the American commons, where European immigrants who had been expelled from their commons met the immense commons of the native peoples and the underground African-American urban commons. Illuminating these struggles in this indispensable collection, Linebaugh reignites the ancient cry, “STOP, THIEF!”

Peter Linebaugh is a child of empire, schooled in London, Cattaraugus (NY), Washington, D.C., Bonn, and Karachi. He went to Swarthmore College during the civil rights days. He has taught at Harvard University and Attica Penitentiary, at New York University and the Federal Penitentiary in Marion, Illinois. He used to edit Zerowork and was a member of the Midnight Notes Collective. He coauthored Albion’s Fatal Tree, and is the author of The London Hanged, The Many-Headed Hydra (with Marcus Rediker), The Magna Carta Manifesto, and introductions to Verso’s selection of Thomas Paine’s writings and PM’s new edition of E.P. Thompson’s William Morris: Romantic to Revolutionary. He lives in the region of the Great Lakes and works at the University of Toledo in Ohio.