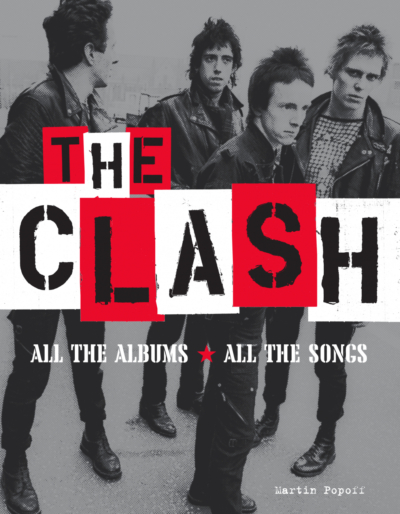 The Clash: All the Albums * All the Songs

The stories behind every studio track

Established in 1976 at the fore London’s punk rock insurgence, The Clash would outlast their peers while creating some of the most influential albums in rock ’n’ roll history. Author Martin Popoff dissects each of the Clash’s ninety-one studio tracks, examining the circumstances that led to their creation, the recording processes, the historical contexts and more. In addition, introductory essays set the scene for the band’s six studio releases (including the double LP London Calling and the triple Sandinista!) and feature sidebars detailing studios, release dates, personnel, and more. Illustrated with rare performance and offstage photography, along with images of 7-inch singles sleeves and gig posters, the resulting volume is a fitting tribute to the foursome whose staunch political stance and groundbreaking amalgam of punk, rockabilly, reggae, and hip-hop earned the title “The Only Band That Matters.”

At approximately 7,900 (with over 7,000 appearing in his books), Martin Popoff has unofficially written more record reviews than anybody in the history of music writing across all genres. Additionally, Martin has penned approximately 108 books on hard rock, heavy metal, classic rock, and record collecting. He was Editor-In-Chief of the now retired Brave Words & Bloody Knuckles, Canada’s foremost metal publication for 14 years, and has also contributed to Revolver, Guitar World, Goldmine, Record Collector, bravewords.com, lollipop.com, and hardradio.com, with many record label band bios and liner notes to his credit as well. Additionally, Martin has been a regular contractor to Banger Films, having worked for two years as researcher on the award-winning documentary Rush: Beyond the Lighted Stage, on the writing and research team for the 11-episode Metal Evolution and on the ten-episode Rock Icons, both for VH1 Classic. Additionally, Martin is the writer of the original metal genre chart used in Metal: A Headbanger’s Journey and throughout the Metal Evolution episodes. Martin currently resides in Toronto and can be reached through martinp@inforamp.net or www.martinpopoff.com.