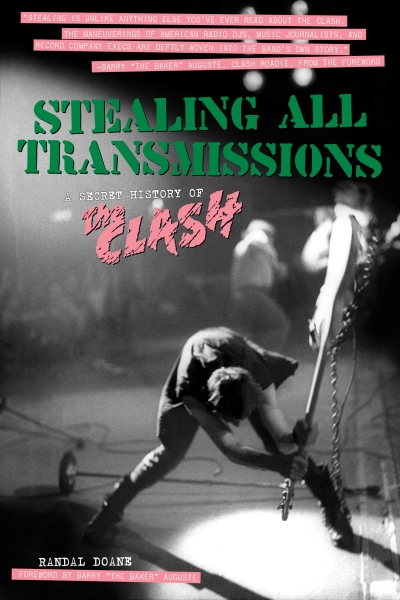 Stealing All Transmissions: A Secret History of The Clash

Stealing represents a distinctive take on the history of punk, for no other book gives proper attention to the forces of free-form radio, long-form rock journalism, or Clash bootleg recordings.

Stealing All Transmissions is a love story. It’s the story of how The Clash fell in love with America, and how America loved them back. The romance began in full in 1977, when select rock journalists and deejays aided the band’s quest to depose the rock of indolence that dominated American airwaves. This history situates The Clash amid the cultural skirmishes of the 1970s and culminates with their September 1979 performance at the Palladium in New York City. This concert was broadcast live on WNEW, and it concluded with Paul Simonon treating his Fender bass like a woodcutter’s ax.

This performance produced one of the most exhilarating Clash bootleg recordings, and the photo of Simonon’s outburst which graced the cover of the London Calling LP was recently deemed the greatest rock’n’roll photograph of all time. That night marked one of the last opportunities for American audiences to see The Clash as a punk band, teetering between conviction and uncertainty, before they became a seriously brilliant rock group.

Stealing represents a distinctive take on the history of punk, for no other book gives proper attention to the forces of free-form radio, long-form rock journalism, or Clash bootleg recordings, many of which are now widely available on the web. This story, which takes its title from the 1981 single “Radio Clash,” includes original interviews with key figures from the New York punk scene. This secret history concludes with an analysis of how we listen to music today and its impact on the written word.

Randal Doane grew up in Northern California on a diet of casseroles, iceberg lettuce, and rockabilly. He spent decades collecting college degrees, and has published essays and articles on music and aesthetics, illegal file-sharing, Ralph Ellison, Sigmund Freud, Brian Wilson, and Bruce Springsteen. He works as an assistant dean at Oberlin College. In his spare time, he still listens to vinyl records on his hi-fi. Randal also sends out the occasional transmission about the punk and post-punk eras via stealingalltransmissions.wordpress.com and twitter at @stealingclash

Barry “The Baker” Auguste served as backline roadie and drum tech for The Clash from 1976 to 1983. He lives outside of Philadelphia, blogs periodically at thebaker77.wordpress.com, and is holding out hope for humanity, for now.