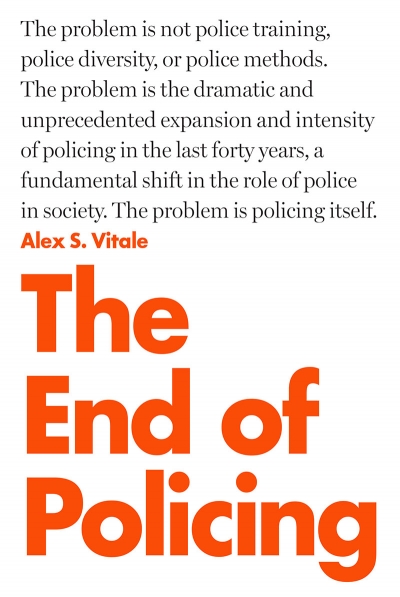 The End of Policing

How the police endanger us and why we need to find an alternative. By Alex Vitale

Recent years have seen an explosion of protest against police brutality and repression—most dramatically in Ferguson, Missouri, where longheld grievances erupted in violent demonstrations following the police killing of Michael Brown. Among activists, journalists, and politicians, the conversation about how to respond and improve policing has focused on accountability, diversity, training, and community relations. Unfortunately, these reforms will not produce results, either alone or in combination. The core of the problem must be addressed: the nature of modern policing itself. “Broken windows” practices, the militarization of law enforcement, and the dramatic expansion of the police’s role over the last forty years have created a mandate for officers that must be rolled back.

This book attempts to spark public discussion by revealing the tainted origins of modern policing as a tool of social control. It shows how the expansion of police authority is inconsistent with community empowerment, social justice—even public safety. Drawing on groundbreaking research from across the world, and covering virtually every area in the increasingly broad range of police work, Alex Vitale demonstrates how law enforcement has come to exacerbate the very problems it is supposed to solve.

In contrast, there are places where the robust implementation of policing alternatives—such as legalization, restorative justice, and harm reduction—has led to reductions in crime, spending, and injustice. The best solution to bad policing may be an end to policing.

“The End of Policing combines the best in academic research with rhetorical urgency to explain why the ordinary array of police reforms will be ineffective in reducing abusive policing. Alex Vitale shows that we must move beyond conceptualizing public safety as interdiction, exclusion, and arrest if we hope to achieve racial and economic justice.”