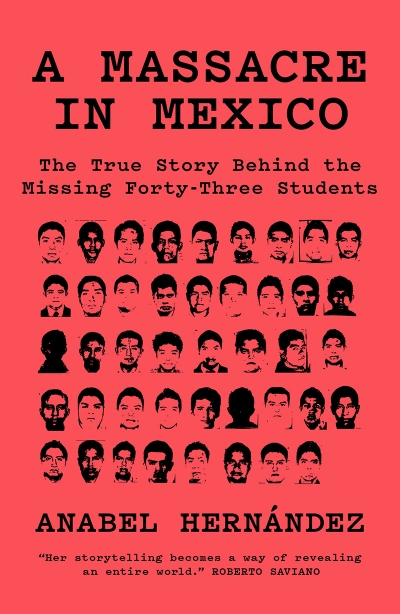 A Massacre in Mexico

On September 26, 2014, a party of students from the Ayotzinapa Rural Teachers’ College were en route to a protest when intercepted by local police. A confrontation ensued. Come the morning, the students were nowhere to be found. The crime that had transpired and the resultant cover-up brought the profound depths of corruption in the Mexican government and police force—as well as the vulnerability of ordinary Mexicans—into stark relief.

Investigative reporter Anabel Hernández reconstructs the terrible events of that night and its aftermath, giving us the most complete picture available. Her sources are unparalleled. In researching this book, she secured access to internal government documents that have not been made public and to surveillance footage the government has tried to hide and destroy. Hernández demolishes the Mexican state’s official version of events, which the Peña Nieto government cynically dubbed the “historic truth.” As her research shows, state officials at all levels, from police and prosecutors to the upper echelons of government, conspired to put together a fake case, concealing and manipulating evidence, and arresting and torturing dozens of “suspects,” procuring forced confessions to back up the official lie. By following the role of the various Mexican state agencies through the events in such remarkable detail, A Massacre in Mexico shows with exacting precision precisely who is responsible for this monumental crime and who needs to be held accountable.

“A detailed coverage of the government’s horrifying and often clumsy attempt at a cover-up … her sources are clear and convincing.”