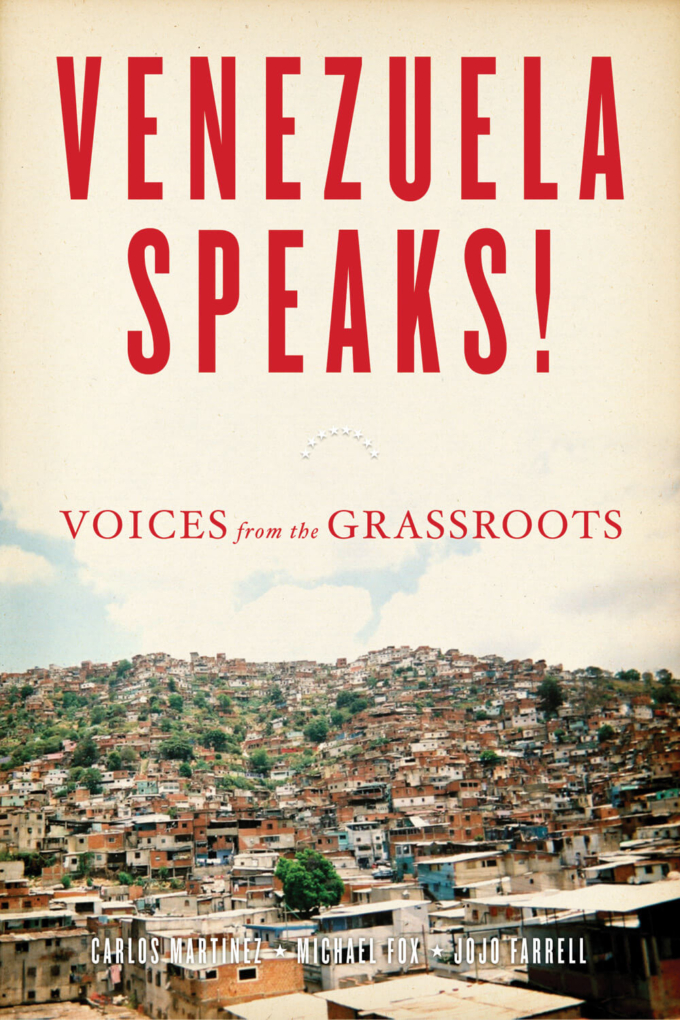 Venezuela Speaks!: Voices From The Grassroots

A collection of interviews with activists and participants from across Venezuela’s social movements. These interviews offer a compelling oral history of Venezuela’s democratic revolution

For the last decade, Venezuela’s “Bolivarian Revolution” has captured international attention. Poverty, inequality, and unemployment have all dropped, while health, education, and living standards have seen a commensurate rise. The international mainstream media has focused predominantly on Venezuela’s controversial leader, President Hugo Chavez, who has routinely been in the headlines. But without the active participation of large and diverse sectors of society, Chavez’s moment on the scene would have ended long ago.

Venezuela Speaks!: Voices from the Grassroots is a collection of interviews with activists and participants from across Venezuela’s social movements. From community media to land reform; cooperatives to communal councils, from the labor movement to the Afro-Venezuelan network, Venezuela Speaks! sheds light on the complex realities within the Bolivarian Revolution. These interviews offer a compelling oral history of Venezuela’s democratic revolution, from the bottom up.

“Venezuela Speaks! is a very important book in the growing literature of books on Venezuela‘s Bolivarian Revolution. Almost all of the books written on this topic so far take a “top-down” perspective on what is happening in contemporary Venezuela. This book, though, provides an unfiltered participant’s perspective on Venezuela’s incredibly diverse social movements and, in the process, dispels the notion that President Chavez is the only one who counts when trying to understand Venezuela.”
–Gregory Wilpert, author of Changing Venezuela by Taking Power: The History and Policies of the Chávez Government and editor of Venezuelanalysis.com

“Michael Fox, Carlos Martinez, and JoJo Farrell cut through the mist that usually surrounds discussions of Venezuela to enter a world of impressive political and cultural diversity. Venezuela Speaks! is a geography of struggle, a sociology of passion, and an ethnography of hope, of the unrelenting insistence that people have a right to control their own lives, and that in doing so, a better world will be made.”
–Greg Grandin, author of Empire’s Workshop: Latin America, the United States, and the Rise of the New Imperialism.

“The authors of this book are not starry-eyed ideologues; they are experienced activists who have traveled the world observing diverse efforts at ending poverty and injustice. They portray a Venezuela in struggle that we can all learn lessons from in our efforts to save humanity from itself.”
–Kevin Danaher, Co-Founder, Global Exchange and Green Festivals.

“Venezuela Speaks! provides a platform for Venezuelan revolutionaries to speak for themselves, to tell their own stories, to use their own words to explain the Bolivarian Revolution. Unadulterated, captivating, and a must read for anyone who wishes to truly understand today’s Venezuela and its historic political process.”
–Chesa Boudin, author of Gringo: A Coming of Age in Latin America and The Venezuelan Revolution: 100 Questions – 100 Answers.

Carlos Martinez recently served in Venezuela as the program director for Global Exchange, where he coordinated dozens of delegations to Venezuela. His articles have been published in Common Dreams, Monthly Review Zine, and on www.venezuelanalysis.com. Carlos lived in Venezuela for two years and now resides in San Francisco, California.

Michael Fox is a journalist, a reporter, and a documentary filmmaker based in South America. He has covered Venezuela extensively as a writer for www.venezuelanalysis.com, and his articles have been published in Earth Island Journal, the Nation, NACLA, and Yes Magazine. He is the producer of the weekly radio headlines on www.venezuelanalysis.com, cofounder of the internet radio program Radio Venezuela en Vivo, and codirector of the documentary Beyond Elections: Redefining Democracy in the Americas.

JoJo Farrell worked in Venezuela as the program director for Global Exchange, an international human rights organization. A journalist and former reporter, he teaches and lives in Brooklyn, New York.