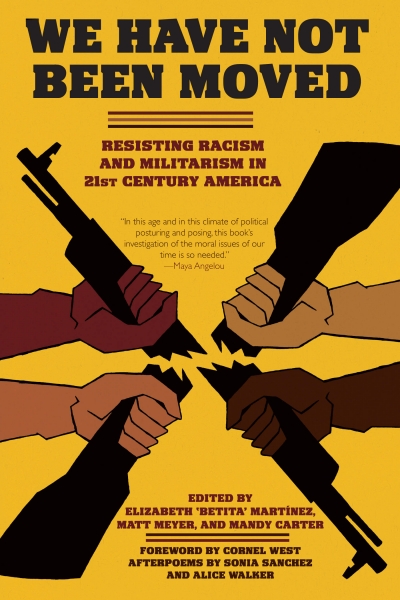 We Have Not Been Moved: Resisting Racism and Militarism in 21st Century America

A collection of articles from scholars and activists exploring the major points of intersection between white supremacy and the war machine and what needs to be done.

We Have Not Been Moved is a compendium addressing the two leading pillars of U.S. Empire. Inspired by the work of Dr. Martin Luther King Jr., who called for a “true revolution of values” against the racism, militarism, and materialism which he saw as the heart of a society “approaching spiritual death,” this book recognizes that—for the most part—the traditional peace movement has not been moved far beyond the half-century-old call for a deepening critique of its own prejudices. While reviewing the major points of intersection between white supremacy and the war machine through both historic and contemporary articles from a diverse range of scholars and activists, the editors emphasize what needs to be done now to move forward for lasting social change. Produced in collaboration with the War Resisters League, the book also examines the strategic possibilities of radical transformation through revolutionary nonviolence.

About Elizabeth Betita Martínez:
Elizabeth Betita Martínez is a Chicana feminist and a long-time community organizer, activist, author, and educator. She has written numerous books and articles on different topics relating to social movements in the Americas. Her best-known work is the bilingual 500 Years of Chicano History in Pictures, which later formed the basis for the educational video ¡Viva la Causa! 500 Years of Chicano History. Her work has been hailed by Angela Y. Davis as comprising “one of the most important living histories of progressive activism in the contemporary era … [Martínez is] inimitable…irrepressible…indefatigable.”

Martínez began her political work in the early 1950s. She worked in New York for the United Nations Secretariat as a researcher on colonialism and decolonization in Africa. During the 1960s, Martínez served full-time in the civil rights movement with the Student Non-Violent Coordinating Committee (SNCC) in the South and as a coordinator of its New York office. In 1968, she moved to New Mexico to start a newspaper to support the Alianza Federal de Mercedes. Along with lawyer Beverly Axelrod, Martínez founded the bilingual movement newspaper El Grito del Norte, and co-founded and directed the Chicano Communications Center, a barrio-based organizing and education project. Since moving to the Bay Area in 1976, Martínez has organized around Latino community issues, taught women’s studies, conducted anti-racist training workshops, and worked with youth groups. She ran for governor of California on the Peace & Freedom Party ticket in 1982 and has received many awards from student, community, and academic organizations, including Scholar of the Year 2000 by the National Association for Chicana and Chicano Studies. She is the author of De Colores Means All of Us: Latina Views for a Multi-Colored Century (1998), and editor of SNCC’s Letters From Mississippi (1964). In 1997, she and Phil Hutchings co-founded the Institute for MultiRacial Justice, which “aims to strengthen the struggle against white supremacy by serving as a resource center to help build alliances among peoples of color and combat divisions.”

About Mandy Carter:
Mandy Carter began her long career as a human rights and nonviolent activist working with the War Resister’s League (WRL) in San Francisco, beginning in 1969. A veteran of Rev. Dr. Martin Luther King Jr.’s Poor People Campaign, Carter has been called “one of the nation’s leading African American lesbian activists” by the National Organization of Women. She has served on countless planning committees for national and regional lesbian and gay pride marches—including the steering committee for the historic 1987 March on Washington for Lesbians and Gays. As a staff member of the WRL’s Southeast regional office throughout the late 1970s and 1980s, Carter worked on the Boards of the National Stonewall Democratic Federation, the Triangle Foundation, Equal Partners in Faith, and Ladyslipper Music.

In 1992, Carter joined the staff of the Human Rights Campaign in Washington DC, serving as Public Policy Advocate with a particular focus on the religious and radical right’s attacks on gays and lesbians through exploitation of the black community. In 1995, she returned to the south and founded North Carolina Mobilization ’96, an electoral campaign organizing against long-time Senator Jesse Helms. She also has served as the national field director and board member of the National Black Gay and Lesbian Leadership Forum. Carter is a co-founder of Southerners on New Ground (SONG). In 2010, the National Black Justice Coalition featured Mandy in their “Jewel” column, noting that she is “a legend in the LGBT community, the Black community, and to all of us concerned about peace.”

About Matt Meyer:
Matt Meyer is an educator-activist, based in New York City. Founding co-chair of the Peace and Justice Studies Association, and former Chair of the Consortium on Peace Research, Education and Development (COPRED), Meyer has long worked to bring together academics and activists for lasting social change. A former public draft registration resister and chair of the War Resisters League, he continues to serve as convener of the War Resisters International Africa Working Group. With Bill Sutherland, Meyer authored Guns and Gandhi in Africa: Pan-African Insights on Nonviolence, Armed Struggle and Liberation (2000), of which Archbishop Desmond Tutu wrote, “Sutherland and Meyer have looked beyond the short-term strategies and tactics which too often divide progressive people… They have begun to develop a language which looks at the roots of our humanness.”

Meyer is author of Time is Tight: Transformative Education in Eritrea, South Africa, and the USA (2007), based in part on his experiences as Multicultural Coordinator for the NYC Board of Education’s Alternative High Schools and Programs. He has edited the Fellowship of Reconciliation’s Puerto Rico: The Cost of Colonialism; guest edited numerous special issues of Blackwell/Sage Press’ professional journal Peace & Change; and—with Elavie Ndura-Ouedraogo—co-edited the two-volume series Seeds of New Hope: Pan African Peace Studies for the 21st Century (2009) and Seeds Bearing Fruit: Pan African Peace Action for the 21st Century (2010). Meyer is also a founder of the local anti-imperialist collective Resistance in Brooklyn, and editor of Let Freedom Ring: A Collection of Documents From the Movements to Free U.S. Political Prisoners (2008). Argentine Nobel Peace laureate Adolfo Perez Esquivel has commented that “Meyer is a coalition-builder,” one who “provides tools for today’s activists” in his writings and work. Esquivel cited Let Freedom Ring, for which he provided the foreword, as “a welcome and important addition to the growing literature on U.S. human rights abuses.”

About Cornel West (Introduction):
Cornel West is a prominent and provocative democratic intellectual. He is the Class of 1943 University Professor at Princeton University. He graduated Magna Cum Laude from Harvard in three years and obtained his M.A. and Ph.D. in Philosophy at Princeton. He has taught at Union Theological Seminary, Yale, Harvard, and the University of Paris. He has written 19 books and edited 13 books. He is best known for his classic Race Matters, Democracy Matters, and his new memoir, Brother West: Living and Loving Out Loud. He appears frequently on the Bill Maher Show, Colbert Report, CNN and C-Span as well as on his dear Brother, Tavis Smiley’s PBS TV Show.

About Alice Walker (Afterword/poems):
Alice Walker’s writings have been translated into more than two dozen languages, and her books have sold more than fifteen million copies. Along with the Pulitzer Prize and the National Book Award, Walker’s awards and fellowships include a Guggenheim Fellowship and a residency at Yaddo. In 2006, Walker was honored as one of the inaugural inductees into the California Hall of Fame. In 2007, Walker appointed Emory University as the custodian of her archive, which opened to researchers and the public on April 24, 2009.